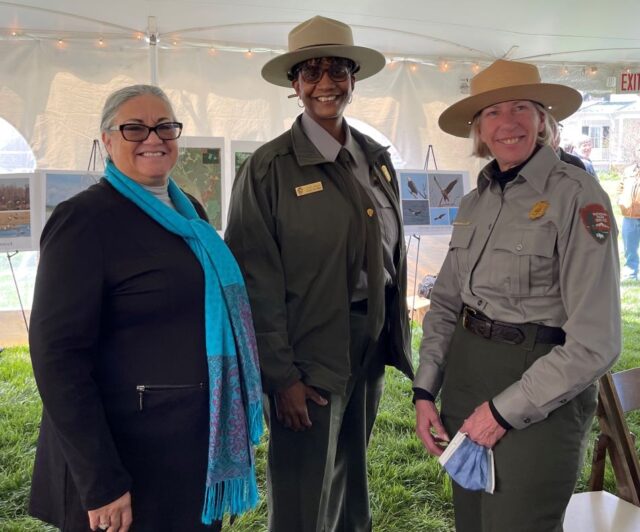 Prior to European arrival, Indigenous peoples of the Chesapeake Bay lived and worked alongside the Bay’s many rivers, whose abundant resources and inspiring landscapes provided both bodily and spiritual sustenance. Today, thanks to archeology, oral history among Tribal members and primary resources like Captain John Smith’s map of the Chesapeake, Tribes are finding and reconnecting with the places that their ancestors once called home.

On April 1st, 2022, the Rappahannock Indian Tribe announced the return of 465 acres of land along the Rappahannock River. Friday’s “Return to the River” celebration was attended by Secretary of the Interior Deb Haaland. Addressing a crowd of Tribal citizens and council members, drummers, donors, and leaders from local and national conservation organizations, Haaland remarked, “This historic reacquisition underscores how Tribes, private landowners, and other stakeholders all play a central role in this Administration’s work to ensure our conservation efforts are locally led and support communities’ health and well-being.”

Chief Anne Richardson, whose father and grandfather were Tribal chiefs before her, reflected on her people’s centuries-long separation from the Rappahannock River. “We have worked for many years to restore this sacred place to the Tribe,” she said. “With eagles being prayer messengers, this area where they gather has always been a place of natural, cultural and spiritual importance.”

The natural beauty of Fones Cliffs is immediately apparent to those who visit its shores. This beautiful landscape also boasts one of the largest bald eagle populations in the mid-Atlantic and is considered an Important Bird Area by the National Audubon Society.

The historic significance of Fones Cliffs is likewise undeniable. Listed as a “high potential route segment” in the Chesapeake Trail’s Comprehensive Management Plan, this stretch of the Rappahannock River is where the Rappahannock first encountered and defended against Captain John Smith during his 1608 voyages.

In 2016, the Chesapeake Trail and its principal nonprofit partner Chesapeake Conservancy collaborated with the Rappahannock Indian Tribe and St. Mary’s College of Maryland to complete an Indigenous Cultural Landscape (ICL) Report of the Rappahannock River.

“The Chesapeake Trail identified Fones Cliffs as a highly significant place early on,” said the Chesapeake Trail’s superintendent Jerri Marr. “We are proud to have played a part in documenting the Tribe’s connection to this special landscape.”

The Rappahannock Indian Tribe will place the land in trust with the Bureau of Indian Affairs. Currently, the land is held in a permanent conservation easement donated to both the Tribe and the U.S. Fish & Wildlife Service by the Chesapeake Conservancy. The donation of the conservation easement to the Tribe ensures that this ancestral homeland will be protected from development and remain in the hands of Tribal citizens for generations to come.

The Tribe plans to make trails and offer educational programming on the site, build a replica 16th century town and expand the Return to the River program, which educates Tribal youth in the traditional way of life that depended upon the river.