Modeled after the North Country Trail Association’s successful “Hike 100 Challenge,” this year the North Country, Arizona, and New England national scenic trails are challenging trail users to hike 50 miles to earn a special patch or other prizes in commemoration of the 50th Anniversary of the National Trails System. In addition to logging miles, some organizations are also awarding points to those who volunteer, share a photo, or attend a trail event. 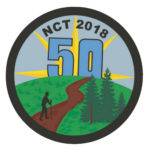 On October 6, 2018, the Arizona Trail Association will encourage over a thousand hikers, runners, bikers, and equestrians to sign up for sections to collectively complete the entire length of the 800-mile trail in 24 hours. The “AZT in a Day” challenge is modeled after a similar effort on the Mountains-to-Sea Trail in North Carolina last fall.

The Lewis and Clark National Historic Trail launched a #LewisandClarkPups social media campaign modeled after the “Flat Stanley” project to build excitement for the trail and the 50th Anniversary of the National Trails System. Since a Newfoundland dog named Seaman accompanied the Lewis and Clark expedition, four of his fictional ancestors (stuffed animal pups) will each travel segments of the trail by being mailed to partner visitor centers this summer. The idea is to create a fun way for people to connect along the trail by sharing photos of themselves with the dogs (named Dakota, Harper, Keelie, and Rocky) on social media. Partner sites will report what the pups find on the trail on the NPS blog, “Newfie News.”

UPDATE 6/26/2018: To celebrate the 50th anniversary of the creation of the National Trail System and the 60th anniversary of National Aeronautics and Space Administration (NASA), a plush toy representation of the most famous of trail dogs will travel to the International Space Station (ISS). On June 29, a small plush toy version of the legendary Newfoundland dog named Seaman, that accompanied Lewis and Clark on their famous expedition in the 1800’s will be heading to the ISS on a mission. He will perform a variety of activities with the astronauts over several months, including surveying and photographing portions of the 3,700 miles of Lewis and Clark National Historic Trail and encourage others to learn more about their National Trails System. “Seaman Jr.” as this pup is named, will help both agencies celebrate. NASA and the National Park Service have collaborated through the years on many STEM-related projects, including the Earth to Sky Partnership and last year’s total solar eclipse. 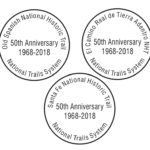 The Bureau of Land Management (BLM) has produced a variety of outreach materials to commemorate the 50th Anniversary of the National Trails System. Its interactive story map, “Authentic adventures on BLM-managed trails,” features 50 special sites and segments. BLM released three new passport stamps to celebrate the El Camino Real de Tierra Adentro, Santa Fe, and Old Spanish national historic trails, which play a major role in the history of New Mexico and West Texas. BLM also created large displays and banners which are being used as templates by the National Park Service and U.S. Forest Service and are being reserved by agencies and trail organizations for various events through BLM’s reservation calendar.

This year’s American Solar Challenge, July 14-22, 2018, will follow portions of the Oregon National Historic Trail and other trails in commemoration of the 50th Anniversary of the National Trails System. University students from around the world will design and build solar-powered cars and drive them 1,700 miles from the Lewis and Clark National Historic Trail Headquarters in Omaha, NE to the High Desert Museum in Bend, OR.