Blazing into history along the CDT

Travelers along the Continental Divide Trail (CDT) face many challenges. The trail traverses long waterless stretches in New Mexico’s deserts and Wyoming’s Great Divide Basin, soars to elevations reaching over 14,000 feet, and crosses snowfields that persist well into summer. Even day hikes along this 3,100-mile national scenic trail can be tough, and thru-hikes should only be attempted by the most well-prepared among us. 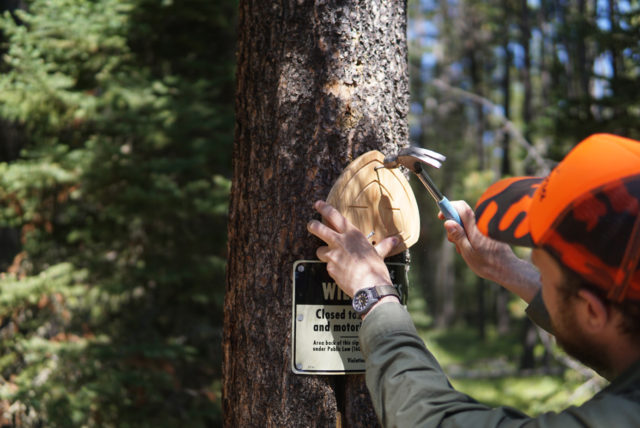 Throughout the spring and summer, volunteers marked over 750 miles of trail as part of Blaze the CDT. Photo Credit: Continental Divide Trail Coalition

But now, finding your way on the CDT has gotten just a little bit easier. This year, in honor of the CDT’s 40th anniversary, the Continental Divide Trail Coalition (CDTC) put out the call to help “Blaze the CDT.” While the CDT has been marked in various ways throughout its history, in some areas it was completely unmarked, and in others, blow-downs and bleaching from the sun made the existing trail markers difficult to spot, especially since the former plastic markers would often crack or fade.

This spring and summer, more than 50 volunteer “blazers” hit the trail with heavy packs full of blue-and-white aluminum signs  routed wooden signs for wilderness areas, and even posts to be installed in areas above treeline. Thanks to efforts by the U.S. Forest Service, the Bureau of Land Management, Youth Conservation Corps, and volunteer trail adopters, over 2,000 miles had already been blazed in 2017, which left about 750 miles of trail for the blazers to tackle.

“The CDT is an incredible natural and recreational resource owned by all Americans,” said Teresa Martinez, Executive Director of the CDTC. “By making sure the trail is well signed, we hope to encourage more people to explore the CDT and the beautiful Rocky Mountain landscapes it traverses.”

After this year’s efforts, travelers from Mexico to Canada should now find CDT blazes at junctions, trailheads, and other potentially confusing areas—an exciting and worthy result of Blaze the CDT in and of itself. But the cherry on top for those who spend their days working to protect the CDT was all of the engagement the campaign provided.

“This was a really unique volunteer opportunity in that it didn’t require much training or even a leader,” said Morgan Anderson, Field Programs Manager for the CDTC. “Many volunteers used Blaze the CDT as a way to give back while completing a hike they had already planned on the CDT; we had quite a few thru- and section-hikers get involved. It was an amazing way for people who live far away from the trail and can’t normally get involved with our volunteer projects to be a part of the CDT community—to show how important the trail is to them.”

Learn more about the initiative: www.continentaldividetrail.org/blaze-the-cdt/