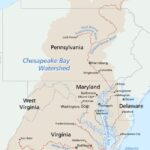 Map of the CJSCNHT courtesy of NPS.

The Captain John Smith Chesapeake National Historic Trail (CJSCNHT) serves to commemorate the routes taken by the Englishman for whom the trail was named during his exploratory voyages from 1607-1609. Smith documented hundreds of Native communities along what is now known as the Chesapeake Bay during those excursions and the sites documented on his map now serve as archeological hotspots and sacred places to local Native peoples. Points of interest include the first National Water Trail in the U.S., Werowocomoco, and the Native Lands Park.

The CJSCNHT begins on land and on the water at the southern end of the Chesapeake Bay, moves northward through the Bay and along side trails that follow the James, Potomac, Rappahannock, and Sesquehanna Rivers. The trail cuts through 5 states (Delaware, Maryland, New York, Pennsylvania, and Virginia), and Washington D.C.