by Partnership for the National Trails System, adapted from a news release from the NPS 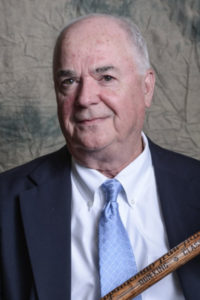 After a 50-year career with the National Park Service (NPS), Don King retired as Chief Realty Officer of the National Trails Land Resources Program Center in Martinsburg, WV on September 27, 2019.

Don’s career began at NPS headquarters in the Main Interior Building in 1969 and took him through several offices before he settled in Martinsburg, WV in the late 1970s to work on the complex Appalachian National Scenic Trail land acquisition program. He also contributed to protection efforts on the Ice Age, North Country, Pacific Crest, and Florida National Scenic Trails, as well as the Overmountain Victory and Captain John Smith Chesapeake National Historic Trails.

He has received many awards and commendations for his service, including the Class of 2019 Appalachian Trail Museum’s Hall of Fame, a Department of Justice Special Commendation, and a 1992 Department of the Interior Meritorious Service Award. Don plans to spend his time in retirement with Joanne, his wife of 48 years, visiting their children and grandchildren and touring some of the national parks he helped acquire.

The 1992 Department of the Interior Meritorious Service Award, presented near the midpoint of his career, best summarizes his accomplishments:

“Mr. King has made profound and lasting contributions to the protection of the Appalachian Trail and to the land acquisition program of the National Park Service. He has used his unique blend of technical knowledge, personal interrelationship skills, management ability, and an appreciation of protecting the natural environment to acquire the land necessary to establish and protect the National Scenic Trail. He participated in managing and then led the 10-State land acquisition program for the trail. Mr. King made these accomplishments while maintaining amicable and professional relations with the thousands of land owners from whom the National Park Service acquired property. His commitment to this project, his personal knowledge, and desire to serve the public and protect the natural environment were key factors in achieving the Government’s program objectives for trail protection. Through his superior management skills, steadfast dedication and outstanding leadership, the goal to protect the Appalachian Trail throughout its length is now reachable. Working with volunteers, State, and local officials, and land owners, he has personally persuaded opponent’s of the trail project to become advocates of it and willing participants. In the course of his work, Mr. King became personally knowledgeable of the property laws of 10 States, the lands records of scores of counties, the physical characteristics of thousands of tracts of land, and the personal needs of thousands of property owners, many of whom were to receive relocation assistance. His vast knowledge of the physical property and property law, his professionalism, and skills in dealing with people have enabled the National Park Service’s Appalachian National Scenic Trail land acquisition program to enjoy a well deserved reputation for fairness and quality. Mr. King is in charge of a full service land acquisition, surveying, and mapping office, and he manages the land acquisition program that is known as the most complex in the Service’s history. Using his personal experience and knowledge as a guide, he has introduced programs to enable his subordinates to develop their skills through innovative upward mobility programs that serve as a model for land acquisition programs. For his outstanding accomplishments in the fields of land acquisition and park resources protection, Donald T. King is granted the Meritorious Service Award of the Department of the Interior.”