by Partnership for the National Trails System
Adapted from April 26, 2018 NPS news release

During National Park Week, National Park Service (NPS) Deputy Director Dan Smith announced the six recipients of the national 2017 George and Helen Hartzog Awards for Outstanding Volunteer Service. George Hartzog was the director of the National Park Service from 1964 to 1972 and created the Volunteers-In-Parks (VIP) program during his tenure. After his retirement, the Hartzogs created an endowment to honor the efforts of exceptional volunteers.

The youth award for outstanding volunteer service went to Nicholas Gilson of Wisconsin for his work on the Ice Age National Scenic Trail. For his Eagle Scout project, Gilson raised donations for the materials needed to rebuild 120 feet of fencing, six interpretive sign posts, two benches, and two directional trail signs for a 1,050 foot-high overlook. He also recruited dozens of volunteers who devoted about 500 hours of time to craft, transport, and install these features atop Bald Bluff. He was nominated by Daniel Watson, IAT Acting Superintendent and Volunteer Coordinator.

Gilson’s accomplishments resulted in “community support and additional volunteerism; strengthened relationships with State agency partners; improved visitor experience for trail users; protected rare and fragile prairie habitat; and added value to the IAT’s VIP program,” Watson wrote in his nomination letter. “Nick’s dedication and professionalism throughout the course of this project is one of the reasons I will continue to look for partnering opportunities with local youths.” 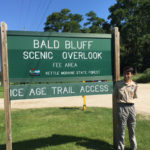 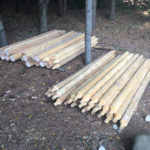