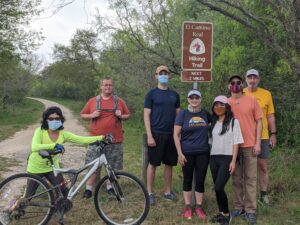 In March, ElCaT’s Trail de Flores chapter organized a hike on the Floresville El Camino Trail. The event provided the chapter an opportunity to educate the public about the history of the trail and surrounding properties, as well as to discuss future trail development plans. A Facebook live event was broadcast during the hike.

In June, the chapter organized a National Trails Day event in collaboration with the Floresville Hike and Bike Trail Committee. The event included a trail hike, information tables from both the chapter and the Floresville Hike and Bike Trail Committee, ElCaT’s impressive educational traveling exhibit, and remarks by local and chapter officials. The chapter was grateful for the support from and attendance by the Floresville Mayor, City Council members, and City Manager, as well the leadership team from the Floresville Economic Development Corporation. The Chapter estimates approximately 50 community members attend the event, and all appeared enthusiastic about the renewed emphasis on making the trail a part of the community fabric, and for the foresight of those involved in seeing the potential for the trail to be a stimulus for city growth. 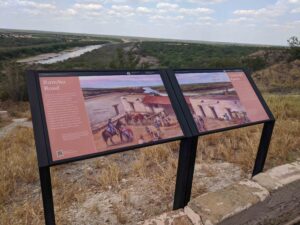 The exhibit design firm created illustrations which NTIR staff can use for other projects, and the design elements established by the contractor are being used for other projects along the route. Prior to this project only one other site had NPS-developed waysides along ELTE.

El Camino Real de los Tejas National Historic Trail Association (ElCaT) is working on a study-route of the trail between Menchaca Springs and McKinney Falls State Park in Austin, Texas. The study-route crosses through Onion Creek Metropolitan Park (OCMP), which is a City of Austin property.

The study is taking place because we know that, historically, McKinney Falls was a crossing of Onion Creek. And though the site is recognized as an official trail resource, the Congressionally-designated NHT trail-line does not go through it. Therefore, in order to fit the puzzle pieces together, we initiated a Community Activated Parks Project with The City of Austin Parks and Recreation Department to conduct historic and archaeological research within OCMP. Our hope is that the written record, combined with artifacts recovered during the archaeological reconnaissance, will demonstrate that the study-route is a historic route of the Camino.

The cost of the project is $85,000 and, to-date, about $34,000 has been raised towards the effort. The historic research is near completion and it has already demonstrated that the study-route and OCMP are part of multiple Spanish expeditions dating to the early 1700s. Ongoing fundraising is also occurring to allow for the archaeology to take place and it is our hope that the overall findings will lead to greater understanding of the historic routes of the trail in Central Texas, while also allowing for new recreational and educational opportunities for the public in OCMP, McKinney Falls, and places in between! Stay tuned for more details!