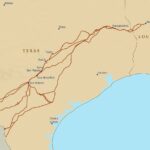 When Frenchman, René Robert Cavelier, Sieur de La Salle, set sail from Western Louisiana in search of the mouth of the Mississippi River in 1685, he overshot and landed on the coast of Texas. Hearing that the French appeared to be in the process of colonizing their new kingdom in North America, the Spanish sent four separate military entradas in search of the party along what eventually became known as the El Camino Real de los Tejas National Historic Trail. The trail remained in use for several centuries and likely originated, at least in part, as a common footpath for Native peoples who lived in the region of modern-day Texas, including the Tejas people.

The trail begins on four separate sites along the western border of Texas, including one in modern-day Laredo, then traverses the length of the state of Texas and on into western Louisiana.