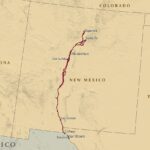 The trail known today as the El Camino Real de Tiera Adentro (CARTA) National Historic Trail was the only link New Mexico had to the rest of the North American continent during the Spanish Colonial Era. The name translates to “royal road” or “king’s highway”. CARTA served many roles during its long reign as the primary thoroughfare in the area, including as a path for Spanish missionaries, conquistadores, and commercial traders. Notable points of interest on the Trail include the Palace of the Governors and the Mesquite Historic District.

Though the CARTA NHT travels just through New Mexico and a short span in Texas on the U.S. side, historic usage of the trail stretched deep into Central Mexico, all the way to Mexico City.