Two brush fires on the AT within two weeks have officials and land managers on alert. 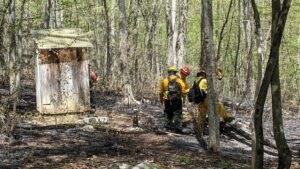 On April 30, 2021, the Appalachian Trail Conservancy (ATC) announced a 7.4 mile trail closure in Virginia near the popular hiking destinations of Dragon’s Tooth and McAfee Knob as a result of a fire burning in the area. The fire was contained quickly and the section of trail was reopened the following day.

Two weeks later, on Friday, May 14, another blaze erupted near the Appalachian Trail (AT), this time in the Clarksburg State Forest of Massachusetts. This fire spread more rapidly as a result of dry conditions and high winds, ultimately charring roughly 950 acres in what came to be recognized as the state’s largest fire in more than two decades.

Though the so-called “East Mountain Fire” crossed the AT, the trail was never officially closed. Still, the ATC issued an alert about the fire via its website and on social media, and firefighters posted in the area warned hikers to avoid the trail. It took more than 120 firefighters from 19 different departments working around the clock to contain the fire and, by Tuesday, May 18, the suppression efforts were reduced to “mop-up” operations.

According to ATC Northeast Senior Regional Director, Hawk Metheny, the blaze had little effect on recreation as it came just before peak season for hikers. Further, the overnight campsites in the state of Massachusetts were still closed due to Covid-19 precautions through the end of May. This made it unlikely that any overnight campers would have been in the area at that time—a stroke of luck since the most notable damage resulting from the fire was the destruction of a single tent platform near the AT in an area known as the Sherman Brook Campsite.

A fallen birch tree was charred but not consumed by the East Mountain Fire. Photo courtesy Cosmo Catalano, Jr.

The East Mountain Fire burned close to the ground, consuming dry debris, brush, and leaf litter in its path, but it never spread to the forest crown. Still, Metheny says that the increase in fire incidents along the AT is a potential cause for concern. Metheny, who has worked in AT management for 30 years, says that, 20 years ago, a forest fire on the Appalachian Trail “was a very rare thing.” And, though he points out that it’s not the same level of threat faced by trails out west (for reference, according to the National Interagency Fire Center, there were 71 active fires burning in the US as this story was being written and all were in States located west of the Mississippi River), he says that the AT is “seeing an increase” in fires in the last several years and that closures of the Trail due to fire have become more-or-less an annual occurrence.

Some of the increase in forest fire frequency on the Trail may be a result of climate change, Metheny says. He says that the snow melt this year happened more quickly than usual, leading to an early start for the spring fire season. Metheny also points out anecdotally that he’s seen fewer soaking rains in the New England forests than in previous years, which may be leaving the forests dryer and therefore more susceptible to fires.

Since the vast majority of fires near the AT are caused by humans, Metheny says that the ATC’s preventative measures are focused primarily on educating campers about campfire bans and the proper use of cookstoves. They are also working to make sure local firefighters are aware of the most direct routes by which they can access different points along the AT in the event that a fire does occur. And, though the land managers along the AT have never had to resort to employing prescribed burns in the off-season as a way to reduce fuel and prevent larger fires, Metheny says that the notion is “on the table” and “something we’ll continue to discuss.”