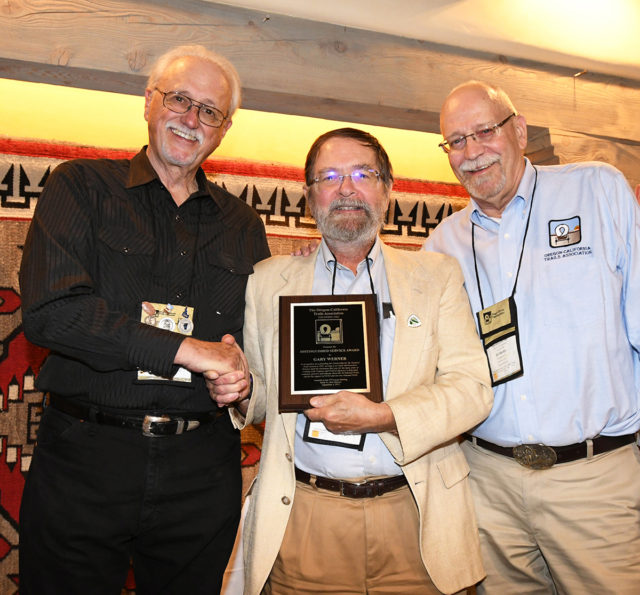 Gary Werner, the Executive Director of the Partnership for the National Trails System, was presented with the Oregon-California Trails Association (OCTA) Meritorious Service Award at the organization’s 37th Annual National Convention in Santa Fe, NM, in September 2019.

One of OCTA’s top awards, Meritorious Service recognition is presented to those who have made lengthy contributions supporting OCTA’s trail preservation and education efforts.

“OCTA’s efforts to preserve the historic overland trails depend on partnerships, with our Federal agency partners, with volunteers and with others dedicated to the sanctity of National Trails System Act passed in 1968,” said Bill Martin, a past OCTA President, in presenting the award.

“One of our most important partners continues to be the Partnership for the National Trails System, which has provided a unified voice in every public policy debate that helps preserve and conserve our historic, scenic, cultural and recreational resources,” he said.

He added that the imprint of Gary Werner’s hiking boots can be seen on virtually every public policy decision involving national historic and scenic trails for the past three decades.

“He has been instrumental in helping OCTA achieve several national goals, including expansion of the footprint of the California and Oregon National Historic Trails,” Martin said. “In addition, thanks to his support, OCTA has had a strong voice in the national trails community, with OCTA representatives serving in leadership roles with the Partnership, assuring that OCTA is heard when it comes to national historic trail preservation issues.

“Gary’s personal support for and friendship with OCTA has been an invaluable asset to our mission and objectives.”