PNTS Board President Barney Scout Mann (standing at left) shows U.S. Forest Service Chief Vicki Christiansen (seated in middle) and other nonprofit trail and USFS representatives the compass of Benton MacKaye, the “Father of the Appalachian Trail,” during a listening session about trail-related priorities on February 11, 2019. Photo Credit: Chelsea Bodamer.

More than 100 people representing nearly 40 trail organizations from throughout the country traveled to Washington, D.C. this February to “Hike the Hill.” Now in its 22nd year, Hike the Hill® is a joint effort between the Partnership for the National Trails System (PNTS) and the American Hiking Society (AHS) aimed at increasing congressional and Federal agency leader awareness of funding and other needs that sustain the National Trails System (NTS).

From February 10-14, 2019, we met with leaders of the Federal land management agencies, congressional staff, and members of Congress to discuss the opportunities for and the threats facing our NTS. Some of the main issues or pieces of legislation discussed include the funding and permanent reauthorization for the Land and Water Conservation Fund (which expired September 30, 2018) as part of the S.47 Natural Resources Management Act public lands package, increasing and allocating funding for the national trails, and addressing the maintenance backlog across public lands, including the U.S. Forest Service deferred maintenance, through the Restore Our Parks and Public Lands Act.

PNTS and AHS also held a Hike the Hill Party at the REI D.C. flagship store on Tuesday, February 12, for local trail leaders, organizational partners, congressional staff, and agency officials to celebrate public lands and trails. While relishing the success of the 50th anniversary of the National Trails System throughout 2018, attendees had another reason to celebrate during the party: the passage of S. 47. That evening, the United States Senate voted 92-8 to approve the Natural Resources Management Act. This bipartisan omnibus public lands package includes over 100 individual bills, including the permanent reauthorization of the Land and Water Conservation Fund (LWCF) and authorization of the North Country National Scenic Trail Route Adjustment Act and the Eastern Legacy Extension of the Lewis and Clark National Historic Trail.

In attendance at the Hike the Hill Party was Vicki Christiansen, the new Chief of the U.S. Forest Service. The previous day Christiansen had met with several trail representatives to discuss trail-related priorities, and a phrase shared by one of the next generation trail leaders, Diego Borjas of the Environmental Charter High School in Los Angeles, CA, struck a chord with the Chief. “(Diego) said when he got on the trail, he felt the ‘spark in his heart.’ That’s why you’re all here, that’s why we’re all here,” Christiansen said. “We’re not just a government agency; we want to be a partner and we want to be long-term stewards with you, and we can’t do it without you, so thank you very very much.” Also addressing the crowd were NPS representative Jeff Reinbold, Assistant Director for Partnerships and Civic Engagement, and BLM representative Nikki Haskett, Assistant Director with the Office of National Conservation Lands and Community Partnerships, who reflected on the accomplishments of the 50th anniversary and their hopes for the future. 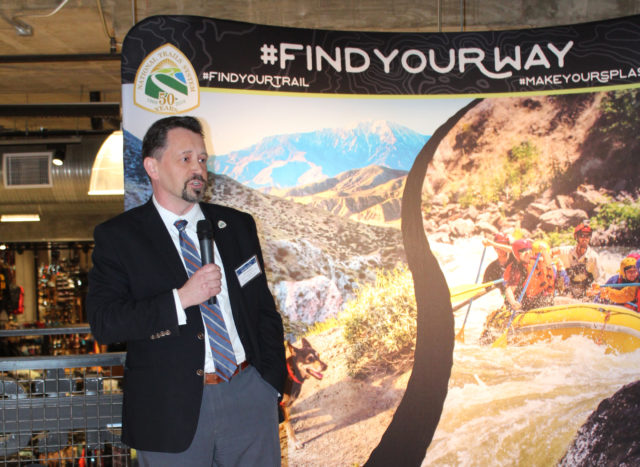 Jeff Reinbold, Assistant Director for Partnerships and Civic Engagement with the National Park Service, said the Hike the Hill “party” at the REI D.C. flagship store felt more like a “revival” with the news of the passage of the public lands package S. 47 that evening, February 12, 2019. Photo Credit: Chelsea Bodamer.

After celebrating this hard-earned victory in the Senate, our attention immediately turned toward bringing S. 47 for a vote by the House of Representatives, which occurred exactly two weeks later on February 26, 2019. The bipartisan bill, now called the John D. Dingell, Jr. Conservation, Management and Recreation Act, passed overwhelmingly by a vote of 363-62 and moved to the President’s desk to be signed into law on March 12, 2019. 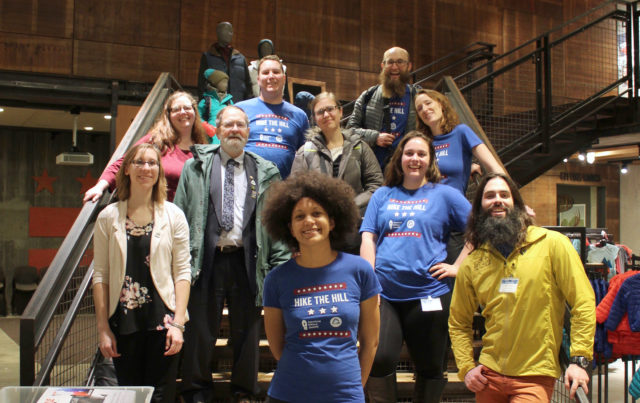 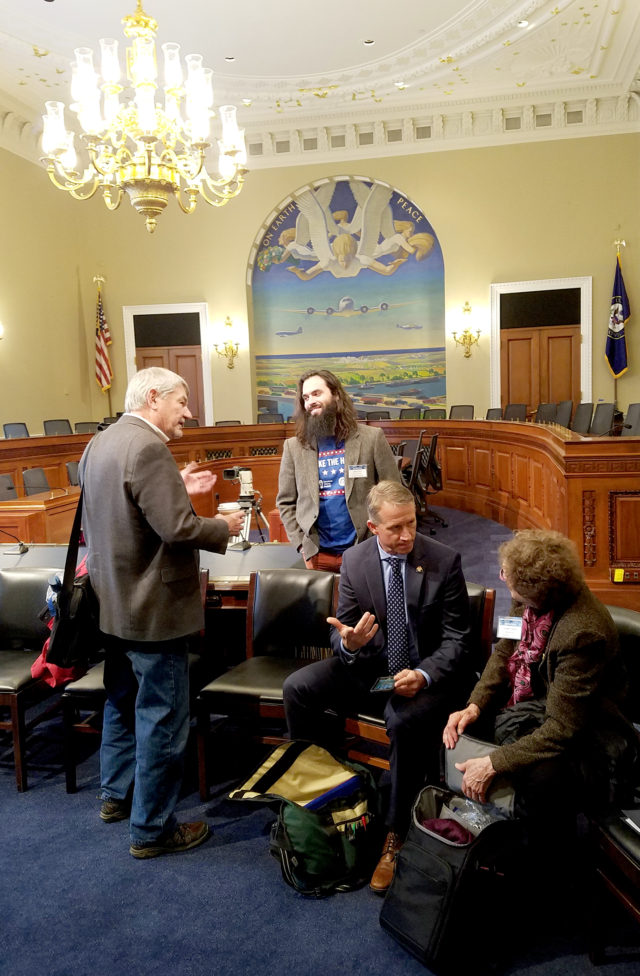 Trail partners confer after a meeting with the House Natural Resources Committee in the Longwirth building on February 12, 2019. Photo Credit: Samantha Haas.

During our meetings with leaders, we discussed the importance of increasing Federal funding for the National Park Service, Bureau of Land Management, and U.S. Forest Service trails programs with specific line items in their budgets, which would help leverage our ability to care for, connect, and protect our NTS.

In 2018 alone, for every Federal dollar provided the return on investment equaled 1.5:1—thanks to volunteer stewardship of the trails. In total, over 29,000 volunteers contributed nearly one million hours of service within the NTS, which equates to a value of over $24 million.

Additionally, private contributions from the national trails organizations for the NTS totaled over $14,489,000. However, as incredible as these contributions are, they are not enough to fully develop and sustain our trails.

Full funding of the Land and Water Conservation Fund (LWCF) and greater funding for the agencies’ trail programs by Congress will help to provide means to close missing links, protect high-priority recreational and historic areas, and fund additional maintenance and necessary resources to already existing trails. Click here for LWCF and Congressional Updates.

Now, more than ever, it’s important for congress to hear our voice. You too can contact Congress and let them know what issues matter most to you. Collectively, our voices will help to ensure the use and protection of these trails for many generations to come.

There is much work yet to be done to make the national trails fully usable and beneficial to all Americans, and you can help us complete and sustain the National Trails System! Your contribution helps us to protect land and resources along the national scenic and historic trail routes, educate children and young people about the trails, and support the work of citizen stewards who build and maintain these trails.

When the partial government shutdown began December 22, 2018, the weeks leading up to this year’s Hike the Hill were marked with uncertainty. On the ground, our nonprofit trail organizations’ efforts were being greatly impacted by furloughed Federal employees and suspended funding agreements. However, we knew it was more important than ever to come together on Capitol Hill and voice our message in solidarity to support trails. The government reopened on January 25, 2019, just two weeks before our nonprofit and Federal partners were scheduled to arrive in D.C., enabling us to continue scheduling meetings. Thank you to everyone for their patience and perseverance!

“During the shutdown, there was this feeling of helplessness,” Aaron Mahr, NPS National Trails Intermountain Region Superintendent, shared during the agency briefing meetings on February 10. “Our (nonprofit) partners later said how much they missed our work together. It’s a testament to what PNTS has been doing (for nearly 20) years. We’re all in this together.”

We’d like to thank our Federal agency partners at the Federal Highway Administration, Bureau of Land Management, National Park Service, U.S. Fish and Wildlife Service, and U.S. Forest Service who administer and manage our national trails for their continued support of the NTS as well as the many members of Congress who support our nation’s trails; and the following organizations for joining us at this year’s event: