About 700 blowdowns were cleared along the Appalachian Trail in Georgia and Southern North Carolina by Appalachian Trail volunteers, Appalachian Trail Conservancy staff, and partner staff. The organization is still assessing other damage, such as to the treadway, according to Morgan Sommerville, ATC Regional Director.

Before and After: David Greene, Wilderness Ranger with ATC’s partner, the Southern Appalachian Wilderness Stewards (SAWS). (Photo courtesy of SAWS) 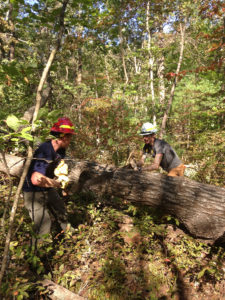