The Iditarod Trail is celebrating 40 years as a national historic trail this year, which also marks the 50th anniversary of the National Trails System Act, and held several trail events to boost public awareness. The trail also benefited from the outreach and communications work of one of the PNTS Trail Interns, employed by Alaska Geographic. Jacob Torres, 19, spent the summer producing a beautiful collection of photographs of the trail, connecting with partners at volunteer work events, using social media to reach people across the State in regards to trail maintenance and stewardship, and distributing new printed visitor guides.

“Before this internship, I (presumably like many others) only thought of two things when I heard the word ‘Iditarod’: The serum run of 1925, and the dog sled race,” Torres wrote. “What I came to understand is that there is a much deeper history to the trail involving gold and mail transportation, and I began to realize how central the trail was in forming and connecting Alaskan settlements in the early 20th century. The fact that these same trails are available to us for recreational use over 100 years later despite Alaska’s harsh and dynamic landscape is truly amazing, and a testament to the preservation and trail work done over the decades.” 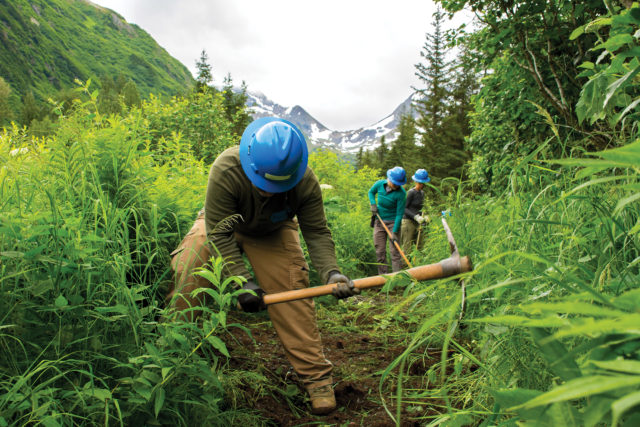 My Experience on the Iditarod National Historic Trail

Every teenager needs a summer job, right? That’s what I initially thought going into this, but what I was quickly going to find out is that this internship would be so much more than that. I had heard about this opportunity through my mom, who works at the Bureau of Land Management, and as soon as I read the job proposal I was in. They were looking for someone with considerable camera skills to create and distribute media to educate people about the past, present, and future of the Iditarod National Historic Trail, and help with a variety of projects relating to the trail for the summer. Well, I have been a photographer for years, I’m great with technology, I have outreach experience with my college physics club, and I had been developing a growing interest in the outdoors. How soon can I start working?

The first task I set out to complete was becoming an expert on the trail’s history. Before this internship, I (presumably like many others) only thought of two things when I heard the word “Iditarod”: The serum run of 1925, and the dog sled race. After learning about its history, however, what I came to understand is that there is a much deeper history to the trail involving gold and mail transportation, and I began to realize how central the trail was in forming and connecting Alaskan settlements in the early 20th century. The fact that these same trails are available to us for recreational use over 100 years later despite Alaska’s harsh and dynamic landscape is truly amazing, and a testament to the preservation and trail work done over the decades.

One of my primary goals for this summer was to increase public awareness of the Iditarod NHT in order to increase traffic and awareness for those who already did frequent the trail that what they’re hiking on is a part of a historic trail system. Conveniently, this is also the 40th anniversary of the Iditarod Trail being officially recognized as a national historic trail, which tied in very nicely to the message I was sending. Since most of the Iditarod NHT is simply too remote for most people to reach, I used the knowledge I gained from my history research marathon to better guide my judgement on which parts of the trail to highlight for the summer. The trails that are easily accessible already see decent traffic, but I wanted to bring new people to the trail and give them the understanding that they’re hiking on the same route that people took to get across Alaska over 100 years ago.

In addition to getting the word out about the trails themselves, I was also spreading awareness about trail maintenance and stewardship. I had the pleasure of photographing multiple trail work events and getting to spend the day with the wonderful people who take the time out of their day to work on keeping Alaska’s trails healthy and well. Meeting friendly new people, working outside, and getting a guided hike through Alaskan wilderness- why wouldn’t anyone want to come along? Admittedly though it can be a challenge to recruit new volunteers for these types of events when Alaska’s communities are so spread out across the state, but that’s where social media can step in and provide a powerful platform to reach people that we otherwise would be unable to reach through traditional means of advertising. In fact, I overheard that one of the trail work events I went to this summer had the best turnout of any volunteer event they had ever seen. It’s pretty humbling to see firsthand the difference you’ve started to make.

One of the best parts of this internship is knowing that the work I’ve done will continue to benefit others even after I’m gone. As summer ends I leave behind a beautiful collection of high-resolution photos of the trail, new partnership connections, and I’ll continue to see new faces out on the trail thanks to my outreach work. We also got updated visitors guides that I’ve helped distribute, which will bring new visitors to the trail even if they don’t use social media.

As the next generation of explorers step up to take over the management of our National Trails System, we need inspired young minds who have the drive to keep our nation’s trails active and maintained, and who will keep their future generations connected to the trail as well. I hope that more youth across America will get involved and have similarly amazing experiences along the way. This has been a truly unique and incredibly rewarding internship, and one that I won’t soon forget.

A panoramic view of a glacial lake fed by Explorer Glacier on the Trail of Blue Ice in Portage, Alaska. Photo Credit: Jacob Torres