In Memoriam: Jere Krakow—NPS, friend of the trails

By Bill Martin, Past President of the Oregon-California Trails Association 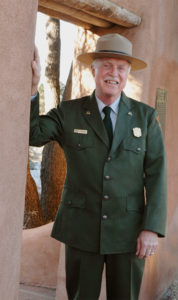 Jere Krakow, a friend of the trails and a friend to all who knew him, passed away peacefully on November 3, 2017, at his home in Albuquerque, New Mexico, following a yearlong battle with cancer. He was 79.

Born on June 4, 1938, Jere grew up on a farm near Davenport, Nebraska. A granite marker near his home that commemorated the Oregon Trail was the spark that ignited his life-long interest in the American West and historic trails. After high school he completed a degree at Peru State College, then earned a Master’s in U.S. History from the University of Wisconsin and a Doctorate from the University of Colorado. He was a professor of history at Missouri State University in Springfield from 1967 to 1983, teaching courses in American History, American Indians, and the West.

In the 1980s he moved from the classroom to the trails. He began as a park historian for the National Park Service and in 1995 was named Superintendent of National Trails for the Intermountain Region that administered nine national historic trails and the Route 66 preservation program. 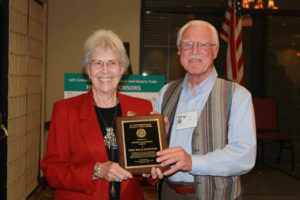 His tenure was marked by the pursuit of his long-standing goal of connecting the nation’s historic sites with all citizens. He retired in 1997 and began two decades of volunteering with the trails organizations he loved, including the Oregon-California Trails Association (OCTA), the Partnership for the National Trails System (PNTS), the El Camino Real de Tierra Adentro Trail Association, and many others.

In 2017, he completed six years of service on the OCTA National Board and three years as the organization’s National Trails Preservation Officer. He also was the OCTA liaison to the PNTS. At last summer’s OCTA convention in Council Bluffs, Iowa, he received the Greg Franzwa Meritorious Achievement Award, the organization’s highest honor.

“His life was devoted to service in the National Park Service and the many communities in which he lived,” his family said. “Jere loved the outdoors, whether camping, fishing, or hiking, and pursued knowledge and travel throughout his life. Jere had friends throughout the country and rarely met a stranger.”

Jere was preceded in death by his parents, Robert and Elfreida Krakow, and his sister, Sandra Smith. He is survived by wife, Jan; sons, Jeff and Joel; and granddaughter, Moira. Memorial services were held Thursday, November 9, at St. Paul Lutheran Church in Albuquerque. In lieu of flowers, donations can be made to St. Paul Lutheran Church, PO Box 2500, Albuquerque, NM 87125 or the Oregon California Trails Association, PO Box 1019, Independence, MO 64051.