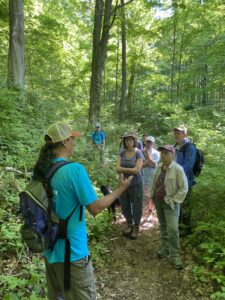 To most trail goers in New England, the Mattabesett, Metacomet, and Monadnock are simply trail names that make up the 215 mile-long hiking route. The history of these names often go unnoticed, blanketed under centuries of oppression and ostracization, etching New England’s Indigenous cultures into seemingly static renditions of the past. However, some Indigenous cultures in Connecticut and Massachusetts have persisted throughout time, crafting vibrant contemporary Tribal communities. The Mashantucket Pequot Tribal Nation and Mohegan Tribe of Indians are the two federally recognized Tribes of Connecticut. Along with State-recognized Tribal communities, their complex histories gave rise to Indigenous place names on the New England Trail (NET). In an attempt to help uplift the histories and traditions that have for far too long gone unnoticed or ignored, the NET and its partners are conducting an Indingeous Site Survey Project along the Trail corridor.

This Project serves to better understand the cultural landscape of the Trail, while simultaneously enhancing interpretive programming for Trail users. Like many trails across the nation, the NET occupies lands that have been home to Indigenous peoples since time immemorial. The Indigenous people of now Connecticut and Massachusetts were caretakers and kin of the ecosystem long before European colonization. Today, they continue to conserve with longstanding stewardship practices. To honor such presence, the Indigenous Site Survey seeks to detail the Indigenous and Tribal histories of the NET and interpret its culturally significant places. Though this Project remains in its early stages, we have found that partnerships between Tribal peoples and the trails community help contextualize the culturally relative information we are trying to compile.

Along with documenting these special places, an interpretive video series is being developed. The NET Team worked diligently during National Trails Day to acquire video footage, particularly from the Indigenous History Hike in southern Connecticut. Led by Jay Levy, a Tribal Consultant and Indigenous Archeologist, and the NET’s lead on the Project, the hike was nothing short of spectacular. From volunteer trail maintainers to NPS staff, each individual who participated left with more knowledge of and respect for Indigenous cultures. To many, the most riveting moment was an impassioned vocalization from Jay, as he shared a traditional song in Mohegan / Pequot language while atop a Trail overlook onto Indigenous land.

Finally, the NET is working with PNTS to develop an interactive map showcasing locations of Indigenous territories at the point of colonial contact in the early 17th Century. This map shows hikers the history of the land they are traversing, akin to an on-the-go land acknowledgement. In our plan to continue uplifting the immense fortitude of Tribal communities along the Trail corridor, the NET and its partners remain immeasurably grateful for the intertribal collaboration required to make this project possible.

Funding for this project is generously provided by the National Park Foundation.