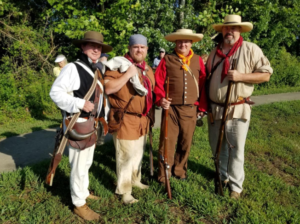 Franklin, Missouri, Arrow Rock Ferry Landing and Big Muddy National Fish and Wildlife Refuge are three jewels along the Santa Fe National Historic Trail. September 1, 2021, 200 years to the day since September 1, 1821, historians, friends, descendants and visitors gathered at the interpretive site in Franklin, Missouri to commemorate William Becknell, a business man involved in freighting, ferrying and the salt trade, and his traders’ departure to Santa Fe. Becknell and his colleagues departed by horseback from Franklin and crossed the Missouri River at the Arrow Rock Ferry Landing that same day. Imagine the excitement of all who gathered on that historic summer morning to commemorate this historic day!

The next stop on this historic day was the Arrow Rock Ferry Landing Site. This beautiful wooded site has been restored and developed by Rich and Debbie Lawson of Warrensburg, MO. Rich Lawson originally bought the land to build a retirement home but changed direction when he began researching the site and its’ significance to the history of Missouri and the United States. Over a ten-year period he has cleared brush, landscaped, created beautiful interpretive signage and done it all again after being flooded by heavy rain!

Dressed in my prairie attire and attending this wonderful commemoration event on September 1, 2021 was one of the highlights of my Santa Fe National Historic Trail experiences. The dedication of our volunteers, staff and agency partners to cherish our National Scenic and Historic Trails is amazing.