Submitted by the National Park Service 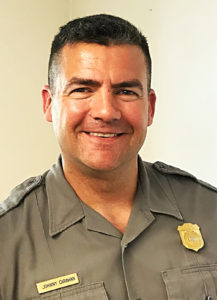 Joining Superintendent Steve Sims at Washington-Rochambeau Revolutionary Route National Historic Trail (WARO) is Johnny Carawan, who officially became WARO’s Trail Administrator in June 2019. WARO is a series of 680 miles of roads used by General Washington and General Rochambeau, during their 1781 march from Newport, RI, to Yorktown, VA.  The route spans nine States and the District of Columbia.

“I am honored to serve as WARO’s new Trail Administrator. The military, logistical, and cultural significance of this trail is without question,” Johnny said. “I am excited to be here and to be a part of helping to preserve and interpret this important part of history.”

The trail highlights a pivotal point in the American Revolutionary War. Without the assistance of thousands of French soldiers and sailors, many of whom gave their lives, the outcome of the war could have been much different. Today the route includes many historic sites and scenic byways that are open to the public and important to explaining this key part of French and American history.

Johnny has 17 years of experience with the NPS.  His background includes a variety of areas from law enforcement, fire and safety, volunteers and partnerships, park operations, and fee and business program management. He also has 20 years of military experience and currently serves as a First Sergeant in the Air Force Reserve. His education includes a Bachelor’s of Science in Interdisciplinary Studies (Business & Health) from Liberty University and a Master’s in Parks, Recreation, Tourism, and Sports Management from North Carolina State University.

Johnny invites you to learn more about the trail by visiting their website at www.nps.gov/waro.