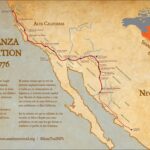 In 1775, Lt Colonel Juan Bautista de Anza led thirty families of Spanish, Indigenous, and African heritage through the Sonoran Desert, across the Colorado River, and over the mountains of California to the Pacific Coast. Their destination was Alta California where, in 1776, they established the first non-Native settlement that would eventually become San Francisco. These families left their homelands in Sinaloa and Sonora—in what is now Mexico—knowing they would never return, risking a dangerous expedition for a new life in a new land. Their arrival in the Bay Area brought them prosperity, while irrevocably changing the lives of the indigenous peoples of the region and bringing about a period of dramatic cultural and biological change.

The Anza Trail commemorates and preserves the route taken by the Anza expedition and recognizes the complex legacy of this journey. The trail provides excellent recreational opportunities in the many communities in which it passes. Notable points of interest along the trail include Tumacácori National Historic Park, Anza Borrego Desert State Park, and the Presidio of San Francisco.