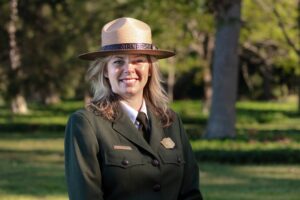 Kym Hall, a 34-year veteran of the National Park Service (NPS), has been selected as the National Capital Area director. She will begin her new role in the coming weeks as she transitions from her current role as the superintendent of several parks in Southeast Virginia.

“Throughout her career, Kym has effectively managed complex resource management projects and strengthened park relationships with community partners, stakeholders and legislators,” NPS Deputy Director for Operations Shawn Benge said. “Her background in special park regulations, policy, and ability to navigate sensitive and controversial park issues positions her well to lead the parks and programs in the greater DC area.”

The National Capital Area director is responsible for 16 superintendents who manage hundreds of park areas in the District of Columbia, Maryland, Virginia, and West Virginia, an approximately $350 million budget, and more than 1,000 employees. The area’s nearly 65,000 acres of Federal parkland include some of the most famous places in the world, such as the White House, Antietam National Battlefield, and the Jefferson Memorial. More than 54 million visitors travel to the area’s national parks for recreation, education, inspiration and relaxation each year.