El Camino Real de los Tejas National Historic Trail Association (ELCAT) has been working on a trail protection and development project for the last several years. The project is focused on a resource known as the Lobanillo Swales, which is a collection of seven remnants of the Royal Road in the forest of east Texas. The site was essentially a super-highway, with some swales measuring 18 feet deep and 12 feet wide. The project began in the fall of 2013, when ELCAT conducted a crowdfunding campaign via Indiegogo to raise money to purchase the site. Over the next couple of months, over $28,000 was raised. 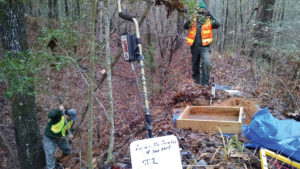 Photo Credit: Steven Gonzales, ELCAT. Above: Archaeologists conducted a stratigraphic survey of the soil at the site in 2015.

ELCAT then began talking with county representatives in Sabine County, TX about when the property might come up for auction. The site was placed on auction on June 4, 2014, and ELCAT was able to purchase the property for a mere $4,100! Over the next several months, the association coordinated with the National Trails Intermountain Region (NTIR) of the National Park Service (NPS) toward appropriate steps to take in the development of the property. In turn, this led to archaeological investigations being conducted at the property in the winter and spring of 2015.

The archaeology demonstrated over three centuries of artifacts dating from the 1700s to the early 1900s. Additional surveys were done in the spring and summer of 2015, and by October of that year, the NPS-NTIR developed a conceptual plan for the site titled, “Lobanillo Swales—Interpretive Retracement Trail Development Concept Plan.” The plan outlined a couple of development alternatives for the site, which ELCAT’s board of directors took into consideration in the coming months, as it moved forward with planning for the location.

By mid-2016, a development alternative had been selected and interpreters from the NTIR visited again to survey the location and utilize their findings, and previously documented archaeological information, to create interpretive panels for the trailhead. Simultaneously, landscape architects from the NTIR were drafting construction level documents for amenities such as the parking area and trailhead.

Photo Credit: Steven Gonzales, ELCAT.
Above: An elevated view of the Lobanillo Swales.

The landscape architect team then visited the site in May 2017 with ELCAT representatives and surveyed and staked the site for development. Lobanillo was on its way to being visitor-ready! In November 2017, Sabine County provided labor and equipment to improve the roadway into the site and develop the parking area and trailhead. By mid-November, the first phase of development was complete.

The final piece of the puzzle came together in April 2018 with the second phase of development at the site. Activities included the development of a quarter-mile loop hiking trail, installation of interpretive panels, and installation of site identification and roadway directional signage to the site. After completion, a dedication ceremony was scheduled with remarks by elected officials and agency representatives, hiking of the new trail, and fundraising for ELCAT.

Over the course of the project, ELCAT has raised nearly $50,000 in funds for the site, and the association will soon be able to demonstrate the protection and development of Lobanillo as a feather in its cap! The effort can be viewed as a textbook example of public-private partnerships called for in the National Trails System Act, and most importantly, the site will be forever protected for future generations to see, explore, learn about, and appreciate.

Lobanillo Swales project at a glance

Located in the pine forests of east Texas, the Lobanillo Swales represent cultural human pathways imprinted into the landscape via pack mule, cart, wagon, and foot from the 1700s to the early 1900s. The swales are the best known physical remnants of a path that has long existed as one of the most ancient roads in American history. 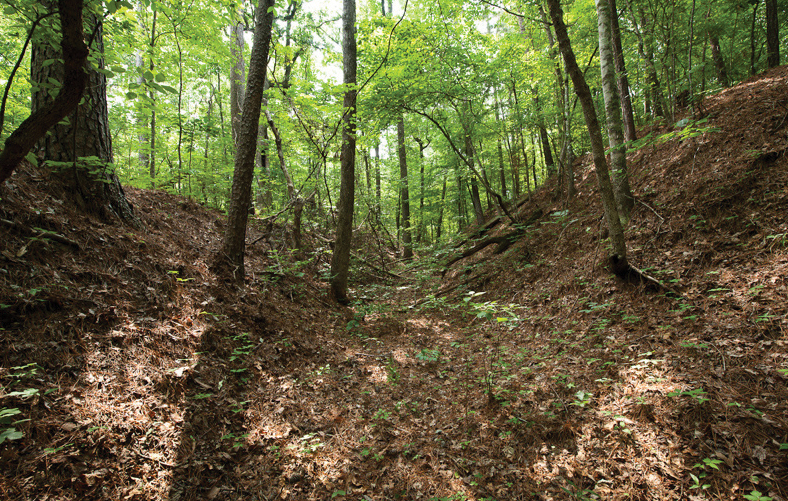