“Liz will always be remembered as a contributor to not only the Pacific Crest Trail Association, but to the Trail Community as a whole.” 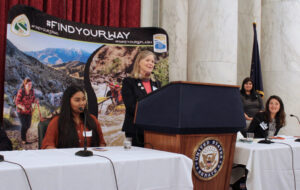 Over many years of dedicated service and work, Liz Bergeron has cemented herself as one of the great trails advocates. Not only did she serve on the PNTS Board of Directors, but she guided PNTS in leadership as the board president for six years.

Liz served as the Executive Director and CEO of the Pacific Crest Trail Association (PCTA) from 2001 to 2022. In this position, she grew the organization from a small staff to a large and successful organization that is the primary nonprofit steward of the Pacific Crest National Scenic Trail (PCT). Under her direction, PCTA expanded to 35 staff members who manage over 2,000 volunteers. Barney Scout Mann, PCTA Past Board Chair and current PNTS Board Chair points to Liz’s many accomplishments guided by her passion for trails: “In 2001, when Liz Bergeron came to the Pacific Crest Trail Association, its annual budget was a few hundred thousand and you could count the employees on one hand. Today the annual budget is over a dozen times larger and I don’t have enough fingers and toes to count the employees. This is but one slice of the passion, care and devotion Liz has brought to the PCTA and the trail.”

As she grew the organization, she significantly raised public awareness of the PCT while simultaneously reducing the impacts of increased trail use, implemented a successful land protection program to acquire and permanently protect PCT lands, and led the growth of the organization’s trail operations program to better protect the trail.

Liz also provided system-wide support and guidance. She shared her experiences with others in the trails community through mentorship to ensure that the successes of the PCT could be applied to other trails. She also participated in the development of Hike the Hill®, the annual advocacy event for National Scenic and Historic Trails which has positively impacted the entire trails community.

In April of 2022, Liz retired from her position in PCTA. And though she is taking a step back from leadership in the trails community, her influence will not soon be forgotten. From all of her friends at PNTS, we thank her and wish her happy trails.