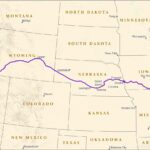 Map of the Mormon Pioneer NHT courtesy of NPS.

Driven out of Missouri in 1838, early Mormons settled along the Missouri River in Illinois. The community they established was called “Nauvoo,” which  is a Hebrew word meaning “beautiful place.” The faithful flocked to Nauvoo and relations with non-Mormon community members eventually soured. Joseph Smith, the founder of the Mormon religion, was arrested in 1844 after ordering the destruction of a local newspaper’s press and, shortly thereafter, a mob broke into the jail and murdered Smith and his brother Hyrum. Smith’s successor, Brigham Young, led an exodus of Mormon followers westward two years later on what later became known as the Mormon Pioneer National Historic Trail.

The Mormon Pioneer NHT begins on the western border of Illinois and traverses Iowa, Nebraska, and Wyoming before coming to an end in Salt Lake City, Utah.