The third round of the U.S. Fish and Wildlife Service (FWS) National Trails Inventory is underway! The entire FWS trail network will be inventoried on National Wildlife Refuges, Wetland Management Districts, and National Fish Hatcheries. As part of the inventory, segments of the National Trails System will be identified, their condition assessed, and geospatial data recorded or updated. 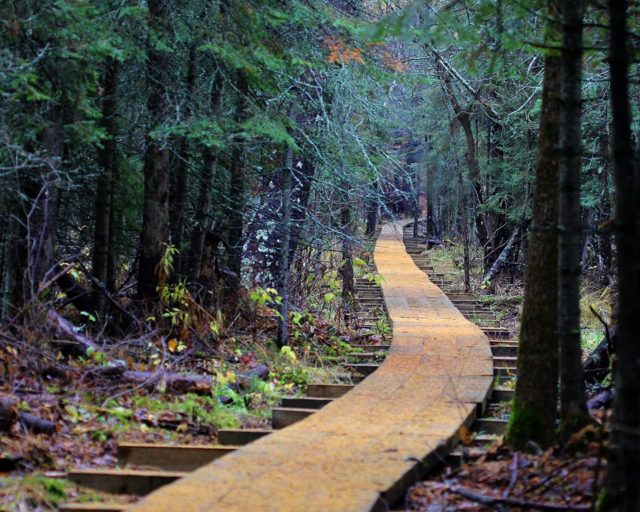 The inventory process began with the awarding of the project under the FWS’s Public Land Corps Cooperative Agreement. Four Service Corps responded to the Notice of Funding Opportunity in November, and after a Merit Review process, the American Conservation Experience (ACE) was selected. The first set of funds was obligated on December 21, 2018, the day before the partial government shutdown.

Fortunately, ACE was able to continue working during the shutdown, and when the FWS resumed work after the government reopened, preliminary steps had already been taken to bring ACE staff on board. In March, retiree Nathan Caldwell was brought back as a reemployed annuitant and getting the trail inventory “on the ground” was a large part of his responsibilities.

In May, the FWS was able to fill a longtime vacancy in the inventory area. Peter Tomczik joined the FWS from the Department of Transportation’s Volpe Center, where he had worked assisting the FWS with its Roads Inventory Program, which the trails inventory will be modeled closely after. Tomczik, the FWS Transportation Asset Management Coordinator, and reemployed annuitant Caldwell will be working on the trails inventory until Caldwell’s appointment ends in March 2020.

The FWS and ACE interns and staff have met and mapped out the inventory process, which is scheduled to wrap up by December 31, 2021. ACE has three interns on board now who are working on data reconciliation from the previous inventory cycle and the FWS Asset Database. After the data reconciliation, the ACE and FWS staff will have meetings with station staff, and then a field visit will be scheduled. ACE will be hiring additional interns to do the data collection later in the year.

One major item that will be dealt with is the “linear features,” which are used as trails by refuge and hatchery visitors but are in the Asset Management Database as roads, or other asset types. To help resolve this issue and others, FWS thinks that expanding the use of the Designed and Managed use categories of the Federal Trail Data Standards (FTDS) may be part of the solution. This third round of inventory will continue to use the FTDS for other data fields as it did for the two previous cycles.

The collected data will also be formatted in such a manner that once it is finalized, it can be transmitted directly into the FWS’ asset and work order databases and geodatabases. Once the tabular and geospatial data is finalized, it will be made available widely through the FWS GIS public facing web portal and via www.recreation.gov. For more information contact Caldwell at nathan_caldwell@fws.gov or (571) 426-8748.