The North Country National Scenic Trail has had an active GIS program since the late 1990s, first starting with combined efforts between the National Park Service and the University of Wisconsin-Madison, and then transitioning into a North Country Trail Association (NCTA) staff position. The NCTA GIS program functions as the data steward on behalf of the National Park Service, producing maps for trail users and managers, as well as conducting a variety of data management and analysis tasks. 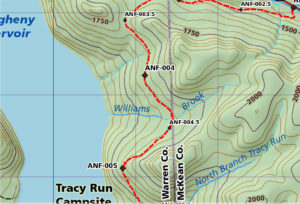 Over the years, production costs for hard copy retail trail maps have risen while new opportunities in the digital realm have emerged. The ubiquity of digital resources has changed expectations of some trail users. Instant access to data and maps in a variety of mediums is the new norm. Barriers to access, including traditional retail transactions, are likely to send users off on an internet quest to find other sources of (potentially less reliable) information. Rather than investing the NCTA’s limited resources into the ongoing development costs associated with something like an app, the NCTA is striving to be content providers across all mediums—allowing our trail users to take advantage of our authoritative information in the platform of their choice.

In early 2014, NCTA began developing some simple web maps using a newly purchased subscription to ArcGIS Online (AGOL). AGOL is similar to Google Maps in that it provides a streaming online map service. Unlike Google Maps, AGOL is perfectly compatible with the GIS data maintained at the NCTA. Not only does this allow for neat looking and dynamic (zoom/pan) maps, it also enables the general public to access the real heart of GIS—the detailed database of information behind the trail segments and point data. Just click on a section of trail and a table will pop up showing relevant information we’ve collected about that segment of trail. This information includes things like ownership, camping regulations, allowed uses, certification status, NCTA chapter contact info, and driving directions to each trailhead.

ArcGIS app in use on smartphone. (Photo courtesy NCTA)

The NCTA’s most popular online map gets around 500 views per day. Using the AGOL Explorer app, users can take advantage of these maps and data on smartphones and tablets. This data is generally updated a number of times per month, from reroutes and new trail construction to improvements and corrections in trail data. But because of the fragile nature of mobile devices and lack of dependable cellular data service, hardcopy maps still have their place in the field. To that end, NCTA launched its “Technical Series” maps in 2016, and maps for North Dakota have been published with other States along the trail continuing in 2017. This enhanced Geospatial PDF format can be downloaded and used on mobile devices, allowing users to track their location directly on a digital version of the hard copy map they’ve printed.

Beyond the delivery medium, the most exciting feature of these new maps is the system used to communicate mileage. For the last few years we’ve been following what has become known as the “Halfmile Project” on the Pacific Crest National Scenic Trail. This ingenious system, developed by a couple of PCT hikers, solves two common problems. The first is that you generally cannot fit a trail line GPS file (track) of any substantial length and detail into a regular consumer grade GPS unit; they exceeded the manufacturer’s size limitations. The half-mile strategy for working around this was to reduce the trail line to a series of generic waypoints at half-mile intervals along the route of the trail.

By sequentially numbering generic waypoints into half-mile intervals, you can load this digital “bread crumb trail” into a GPS and, in theory, it will always be able to find your location to within a half mile of the trail—genius! A byproduct of this sequentially numbered waypoint system is that when these labeled waypoints are shown on a map they become a mileage index system that allows you to estimate the distance between any two points on a map to theoretically within a half mile. The mileage index also serves as a link between our technical series trail maps, our online map, and our digital data, which can be loaded onto a traditional GPS receiver.

NCTA has abandoned the traditional retail model with its new map series in favor of making them freely downloadable from the organization’s website. By removing this “paywall,” the idea is that there will be no real barriers to the trail community relying on the NCTA maps and data as the authoritative information source for the North Country Trail.

Mapping and fundraising: A good match

The North Country Trail Association (NCTA) has been able to successfully raise over $90,000 in two special campaigns focused on supporting and enhancing their mapping program. In 2013, the “I Heart Maps” campaign raised $15,000, and this year, the “NCT2Go” digital maps campaign raised $46,278, which REI matched with an additional $25,000. 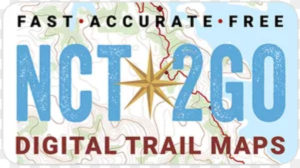 Much of the success of these initiatives is based on two compelling but very different factors; first, hikers like a good map, and second, hikers have come to believe they shouldn’t have to pay for those maps. By maintaining a full-time professional cartographer, the NCTA can easily promise the first expectation: good maps. By choosing to provide great maps for free, a decision was made to eliminate a marginally lucrative revenue source, i.e. map sales. But once the North Country Trail hiking community was made aware of the decision, they came through strong in their donated support which handily offset that hard copy map revenue.

In the end we have found that providing free, digital, and accessible trail maps and serving as the authoritative information source to the online community is a solid value proposition on which to base our mapping fundraising initiatives.