by Ben Richardson, Chief of Planning and Partnerships, and Will Caldwell, Park Guide, National Park Service

On October 6, 1780, during the American Revolution, 900 Patriot soldiers left a temporary camp at what is now Cowpens National Battlefield and continued the pursuit of their British foes following local creeks. The next afternoon, they charged into battle at Kings Mountain (now Kings Mountain National Military Park) and entered our history books. The creeks they followed along this portion were dammed in the 20th century to create Lake Whelchel, a municipally-owned water source for Gaffney, SC, which submerged the old paths.

Previously, a 2.5 mile trail along the southern shore allowed visitors to shadow the trail of these Patriots. But in June 2019, the Overmountain Victory National Historic Trail partnered with the Carolina Thread Trail, City of Gaffney, Cherokee County SC, Gaffney Board of Public Works, and the Cherokee County Overmountain Victory National Historic Trail (OVNHT) Committee to add another chapter to the story of this march. 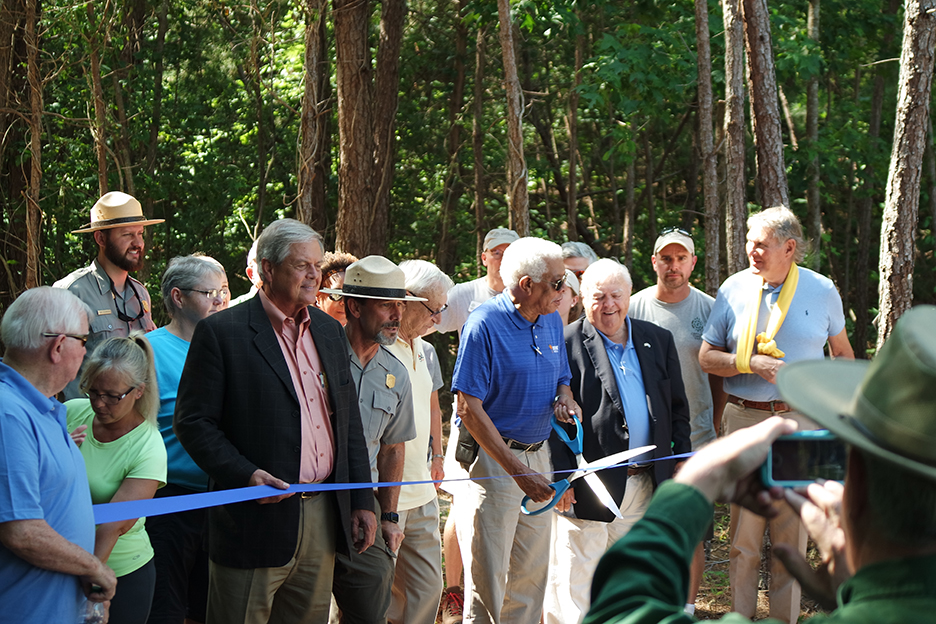 James H. Kelly, Treasurer of the Gaffney Board of Public Works, cuts the ribbon for the 7.5 mile Lake Whelchel Trail on June 29, 2019. (Photo Credit: NPS)

On June 29, 2019, the ribbon was cut on the now 7.5 mile Lake Whelchel Trail. This new trail completes a portion of the OVNHT Master Planning Process to connect Chesnee, SC with Kings Mountain National Military Park. The trail now wraps around the entire lake, providing a variety of route options for the historic trail. The opening ceremony was visited by U.S. Rep. Ralph Norman, South Carolina State Sen. Harvey Peeler, local supporters, and trail advocates from across the southeast. Guided walks, rides, and runs gave visitors the chance to explore and enjoy the nature and the history that can be found on the OVNHT.