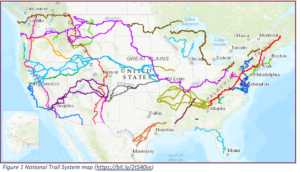 In 2011, the Federal Trail Data Standard (FTDS) established a standardized set of trail terminology that can be consistently applied to trail data, enabling trail information to be shared across multiple agencies and partners. The FTDS addresses the universal need for trail data standards to efficiently manage trails, including National Trails, across the country.

Through discussions, it has come to the forefront that, in order to share information across multiple GIS systems nationwide, there needs to be agreement on how to implement and utilize the FTDS for ease of sharing and aggregating trail GIS data nationwide.

The Federal Trail GIS Schema was designed as a framework and a minimum requirement of core fields for all trail spatial data. During the schema design, the focus was on utilizing this template schema as a tool for aggregating publicly facing trail data. Keeping publicly facing data in mind, not all attributes from the FTDS were included. The schema is flexible enough to allow for additional custom fields to be added at the trail GIS manager’s discretion, including any additional FTDS fields not included in the Federal Trail GIS Schema.

Each feature class schema includes an additional framework, known as feature level metadata, for documenting the lineage and quality of the geospatial data at the feature level. These templates are a starting point. Adding additional attribute fields are encouraged.

Overall, a Federal Trail GIS Schema would make it achievable to have better GIS coordination and collaboration between agencies and partners for various trail projects, efficient sharing of authoritative trail data with the public, and better GIS decision-making support for trails.