NPS staff prepared a manual of the regulations and guidelines governing the maintenance of the NTNST. Several staff members familiarized coordinators with the manual in a class setting, then volunteers went to the trail for hands-on training.

During the training, trail maintenance tools were distributed among the coordinators. Staff identified the types of maintenance issues volunteer groups should address and instructed volunteers on how to correct them as volunteers worked as a team to improve the trail.  Volunteers were then given the responsibility to identify and remedy trail deficiencies as NPS staff supervised.

In addition to trail volunteer training, the NPS and the Association highlighted the anniversary on National Trails Day by leading guided hikes for the public. Hike leaders were selected to feature the historic and recreational aspects of the trail. The Chickasaw Nation provided a hike leader to teach the public how Indians used trails and the natural elements that they looked for to guide them on the trail. A re-enactor portrayed the U.S. Army colonel who was given charge of developing the Indian trail into one of the first federal wagon roads. A physical therapist led a hike to show how to use the outdoor trails for unique physical benefits. NPS also led a hike to make visitors aware of the historical figures who used the Natchez Trace.

NPS dedicated a new NTNST sign and restored fencing to emphasize that the Garrison Creek site is the northern trailhead of a section of the national scenic trail. The Association helped generate local publicity to make the public more aware of the trail.

Volunteer groups that supplied coordinators for training have adopted sections of the trail to help maintain. Within six weeks of training, Nashville Hiking Meetup and REI, who adopted an almost four-mile section, have already trained additional volunteers and improved much of their adopted section of trail. 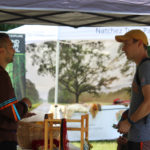 The Chickasaw Nation participated to introduce their story to a new generation of hikers. Photo Credit: Natchez Trace Parkway Association. . 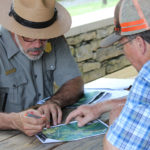 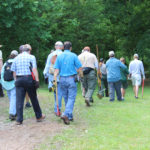 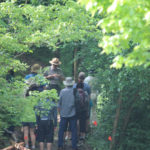 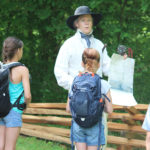 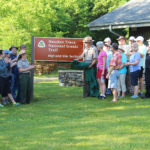 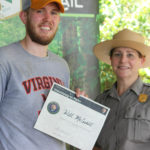