by Partnership for the National Trails System, adapted from partner emails

The National Park Service (NPS) announced in September that Peter Bonsall is the new NPS National Trails System Program Specialist, based out of Denver, CO. After Helen Scully’s retirement from that position in late 2018, Peter has served in a detail position, leading the National Recreation Trails program and the Connect Trails to Parks Fund Source. 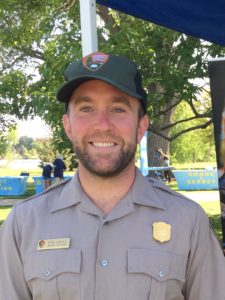 Peter was hired by Steve Elkinton as an intern in 2013 to assist and grow the National Park Service’s Conservation and Outdoor Recreation (COR) Division’s GIS capabilities. When his initial internship ended, he took an assignment assisting Don Briggs on the Potomac Heritage National Scenic Trail with GIS support. He then returned to the COR Division as a GIS intern to provide further GIS support. Peter grew his knowledge of trails, along with his GIS skills, and was hired as the GIS Specialist for the COR Division in 2015.

As the GIS Specialist for COR, Peter managed geospatial data, provided cartographic products, and developed robust geospatially enabled databases for the National Trails System, Wild and Scenic Rivers, and the Rivers, Trails, and Conservation Assistance Program. He assisted both Wild and Scenic Rivers and National Trails with his GIS and communications skills during the 50th anniversary in 2018.

“He will hit the ground running, and provide a wealth of exuberance and support for everything trails,” said Rita Hennessy, Program Lead, Wild and Scenic Rivers and National Trails System.