Retracing the geology and history of the IAT

At 6 a.m. the air was already so thick and heavy it felt like I was breathing through a wet washcloth. I refused to ponder the day’s weather forecast—highs in the low 90s—before I’d even set foot on the trail. With about 1,100 miles ahead of me, I had to remain positive. After nine months of planning, I was poised to embark on a thru-hike of Wisconsin’s Ice Age Trail, one of America’s 11 national scenic trails. I was also aiming to set the first women’s fastpacking record in the process.

When I set foot on the trail that steamy August morning in 2013, only a few people had hiked the entire length of the Ice Age Trail (IAT). Coiled entirely within Wisconsin, it tumbles around the State from east to west and north to south, its path tracing the terminal moraine of the last glacier, which receded from the earth 10,000 to 14,000 years ago. It is the only national scenic trail to showcase geologic features, rather than move hikers from point A to point B. 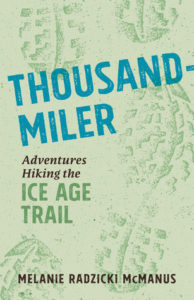 The IAT was the brainchild of Ray Zillmer, a Milwaukee lawyer and avid mountaineer. His original idea was to create a national park that followed the glacier’s terminal moraine, as Wisconsin is considered to have some of the world’s finest, best-preserved glacial remains. But the National Park Service torpedoed his idea, deeming a long, linear park too difficult to administer.

After Zillmer passed away in 1960, others took up the cause. By the time the National Trails System Act was passed in 1968, Zillmer’s idea was morphing into that of a long-distance trail, not a national park. In 1980, with some 250 miles of trail already laid, Congress proclaimed the IAT a national scenic trail, along with the North Country Trail (NCT). The NCT and IAT were America’s fourth and fifth national scenic trails, following the Triple Crowners: the Appalachian, Pacific Crest, and Continental Divide trails.

During my 36-day odyssey on the IAT, which included encounters with cranes, snakes, and snuffling bears, two bouts of cellulitis, and a newfound admiration for glacial geology, I met a handful of other thru-hikers. Their compelling stories, combined with mine, form the basis of “Thousand-Miler.” The memoir also includes the story of Jim Staudacher, the IAT’s first thru-hiker who completed the trail in 1979, Jason Dorgan, who hiked the trail in the overall fastest known time, and Jenni Heisz, one of two veterans to tackle the trail through the then-new Warrior Hike program.

Today, the Ice Age Trail is about two-thirds finished, with some 650 miles of trail and 450 miles of connecting road routes established. The Ice Age Trail Alliance, which builds, maintains, and promotes the IAT, celebrates its 60th anniversary this year with high hopes for the path’s future. After all, when I completed the trail in 2013, I was the 87th person to do so. By the end of 2017, a mere four years later, that number had doubled.

With long-distance hiking growing in popularity across America, thanks in part to the popularity of Cheryl Strayed’s 2012 book “Wild,” our outstanding national scenic trails are being discovered, explored, and enjoyed by many more people. As the National Trails System Act celebrates its 50th anniversary this October, it’s the perfect time to check out a new-to-you path. And to spread the word about these priceless treasures.

Melanie Radzicki McManus’ latest adventure was a thru-hike of the 310-mile Superior Hiking Trail in June 2018. She penned a multi-part series about her experience as part of a special project coordinated by the Minneapolis Star Tribune. The series will be published July-August 2018 and can be viewed online at www.StarTribune.com.