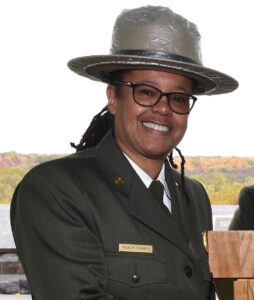 “Valley Forge, Hopewell Furnace, and the Washington-Rochambeau Trail each hold dear narratives woven into the tapestry of our national heritage,” Rose said. “I look forward to working with staff, partners, and stakeholders to invest wisely in the preservation of these treasured places.”

Prior to her regional senior leadership position, Rose served as the Deputy Superintendent for Boston National Historical Park and Boston African American National Historical Site. She was the NPS Bevinetto Congressional Fellow for 2011-2012 and has served as a special assistant to former NPS Director Jon Jarvis and as legislative specialist in the Office of Legislative and Congressional Affairs.

Prior to her selection as Congressional Fellow, she was the NPS Cooperating Association Coordinator in Washington, D.C. for nine years and worked for nonprofit organizations whose work intersects with the National Park Service, including the Wilderness Society and the Parks and History Association.

Rose’s early career was in the field of bookselling where she was a bookstore clerk, book buyer, book reviewer, and eventually a bookstore owner with locations in Washington, D.C. and Baltimore, from 1991 until 1998. Her free time is devoted to family, including her wife, Terri, and their companion animals.