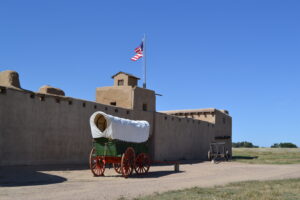 The origin of the Santa Fe National Historic Trail (SFNHT) can be traced back to June 10, 1821, when William Becknell published a notice in the Missouri Intelligencer newspaper soliciting participants for a trip “to the westward for the purpose of trading for Horses & Mules, and catching Wild Animals of every description, that we may think advantageous.”

At the age of 33, Becknell led five other men from Franklin, Missouri toward the southwest beginning on September 1, 1821. Meanwhile, Captain Pedro Ignacio Gallegos and 400 troops had been sent to investigate the plunder of San Miguel by Comanches. On November 13, 1821, these two groups met just south of present-day Las Vegas, New Mexico. It was then that Becknell’s party learned of Mexican Independence from Spain and, hence, of the lifting of trade restrictions.

With Becknell’s arrival in Santa Fe on November 16, 1821, successful trading contact was initiated and the first legal commerce with New Mexico took place. With this first successful trading trip from the United States in 1821 William Becknell became known as the Father of the Santa Fe Trail between Missouri and New Mexico and, thus, the SFNHT was born. This set in motion over a half century of commerce and cultural exchange between New Mexico and eastern trade centers and contributed to the acquisition of the region by the United States during the Mexican War, as well as changes for the inhabitants of the region along the historic Santa Fe Trail.

The Santa Fe NHT is commemorating the 200th anniversary of Becknell’s original journey with events all along the trail from Kansas City, Missouri to Santa Fe, New Mexico throughout 2021 and beyond. Notable events to date include the release of a landmark tour app listing several important historic sites along the Freedom’s Frontier National Heritage Area in Kansas, special exhibits at Santa Fe Trail Association (SFTA) chapter sites in Arrow Rock Missouri State Park, the National Cowboy & Western Heritage Museum in Oklahoma City, Oklahoma, guided tours, programs, and performances along the entire length of the trail planned by communities and all 12 SFTA Chapters. According to SFTA Manager Joanne VanCovern, conversations about the 200th anniversary among SFTA personnel date back to 2007 and planning for events began as long ago as 2015. 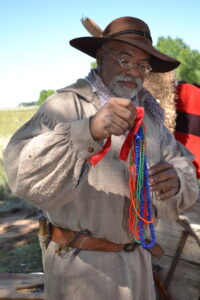 The SFTA partnered with several organizations to promote and commemorate the Santa Fe Trail 200th. This included the National Trails Office in Santa Fe, the Symphony in the Flint Hills, the American Solar Challenge, Bike Across Kansas, and Western Writers of America. A Taste of History filmed two segments on the SFNHT and featured four historic sites for this 15-time Emmy Award winning PBS cooking series with Chef Walter Staib. Culminating a three-year project, the SFTA also debuted the “Santa Fe Trail 200th Traveling Timeline” which was jump-started with the award of a “Love Your Park” grant from the National Park Foundation to help create the graphic design files. The 200th Timeline includes historical and modern entries and will be displayed in conjunction with various events along the length of the Trail in a five-State area.

One of the signature events of the Santa Fe Trail 200th took place during a five-day Symposium in September at Otero College in La Junta, Colorado and Bent’s Old Fort National Historic Site, located outside of present-day La Junta. Reconstructed in 1976, the sprawling adobe complex is an exact replica of the outpost built along the Santa Fe Trail in 1833 by brothers Charles and William Bent with help from an aristocratic Frenchman named Ceran St. Vrain.

Western Music Hall of Famer, and Honorary Chair of the Santa Fe Trail 200th, Michael Martin Murphey, provided a personal concert Friday evening enjoyed by all at Kiva of the Koshare Indian Museum. Saturday evening at Bent’s Old Fort, following a meal of buffalo steaks, SFTA presented their Awards and Hall of Fame inductions, and the evening ended with a traditional Spanish dance known as a Fandango.

November 12-14 saw 200th anniversary events take place in New Mexico, including programs commemorating the meeting of Becknell & Gallegos near Las Vegas and several speaker presentations at the Historic Plaza Hotel. In Santa Fe, the End of the Trail Chapter hosted a dinner at the Historic La Fonda Hotel, as well as a living history reenactment of Becknell’s arrival at the Santa Fe Plaza.

VanCoevern says that it has been “tremendously satisfying” to see years of planning take shape and lead to a wide array of press coverage for the organization and the events across the Trail. “It really got the word out that there is so much more to be learned about the Santa Fe Trail,” she says, adding that the SFTA continues to discover new stories to commemorate in the future.

Additional Chapter and Community activities are still being planned across the SFNHT. Find details about those events at: www.santafetrail200.org