The National Park Service provided the following highlights for the Star-Spangled Banner NHT during the 2021 calendar year: 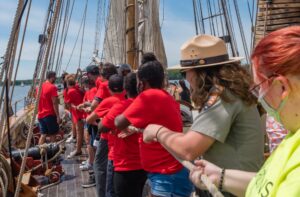 An NPS ranger joins a group of students to haul lines during a Trail Ambassador sail onboard the PRIDE OF BALTIMORE II. Courtesy NPS/Steve Atkinson

The Star-Spangled Banner NHT recently concluded the inaugural year of its Trail Ambassador Sail program in partnership with Pride of Baltimore, Inc. (Pride, Inc). The program reached more than 7,435 in-person visitors through park-ranger led educational programs and deck tours onboard the tall ship PRIDE OF BALTIMORE II (PRIDE II) and over 11,000 people virtually through live streams and videos. These educational programs taught citizens in eight Maryland port towns about privateers and the African American experience during the War of 1812.

PRIDE II, a replica War of 1812 schooner, sailed the Chesapeake Bay and engaged visitors in the history of the people and places in the regions along the Trail. Participants experienced history firsthand through free public deck tours and sailing activities, such as raising the sails and witnessing cannon firing demonstrations. Volunteers from the Chesapeake Independent Blues also provided living history representations of the Maryland citizen-soldiers during the War of 1812.

The experience assisted in building the foundation for future stewards of the Trail, as well as of the natural and cultural resources of the Bay. The ship visited Annapolis, Historic St. Mary’s City, Cambridge, Havre de Grace, St. Michaels, Solomons Island, Baltimore and Chestertown. The Trail and Pride, Inc. worked in collaboration with many regional partners who were integral to the success of the program. The Trail plans to partner with Pride, Inc again in 2022 to continue this program.

The Star-Spangled Banner NHT was very fortunate to have help this year through an intern grant from the Partnership for the National Trails System. Interns Sydni Ratliff-Phillips and Cryss Kosasih were hired to research and create new interpretive content for Trail’s website and public programs.

The work supported through this internship is helping the Trail to tell a more inclusive history of the free and enslaved African Americans who are part of the Chesapeake War of 1812 story. Ratliff-Phillips received her bachelor’s degree in history from Morgan State University in 2021 and is pursuing her master’s degree in history at the University of Delaware. For her internship, she conducted research related to free and enslaved African Americans in the Chesapeake region during the War of 1812. Ratliff-Phillips also created social media posts and new pages on the Trail’s website that highlighted her research. Kosasih, a University of Maryland Baltimore County alum who worked as a historian at the Benjamin Banneker Historical Park and Museum, is incorporating Ratliff-Phillips’ research into interpretive videos and other media to be used for interpretive programs, on the Trail’s website, and through social media channels.

The Star-Spangled Banner National Historic Trail was also joined by Jimmy Looper, a Chesapeake Conservation Corps member, for the 2021-2022 season. Looper is a recent graduate of Washington College where he completed a double major in Environmental Studies and Anthropology, as well as a minor in Chesapeake Regional Studies. The Chesapeake Bay Conservation Corps, a program of the Chesapeake Bay Trust, is focused on increasing access and opportunities for young adults (ages 18-25) to pursue green careers and help create the next generation of stewards to manage and protect the environment. The Trust provides environmental and leadership experience through the Corps by placing the members with nonprofit and government agencies throughout the watershed for a one-year appointment.

The Corps Members receive on-the-job and leadership experience in the environmental field by managing and supporting projects and programs at their host sites, extensive trainings hosted by the Trust, and other opportunities including grant writing and networking. During his year of service, Looper will develop and implement climate change interpretation programs for the Trail and assist in public outreach events.

The Star-Spangled Banner NHT is creating a mobile visitor center to appear at various Trail locations and at public events and festivals to provide many of the functions of a visitor center, such as serving as a place for people to interact with an NPS ranger, pick up brochures about the Trail and other local heritage sites, and participate in education and interpretive programs. The mobile visitor center will be made up of a retrofitted step van, similar in size and style to a delivery truck.

The truck was purchased at the end of FY20 and arrived in August 2021. The Trail received $32,000 grant from the Maryland Heritage Area Authority to help support the interior design and fabrication of the cargo space for the mobile center. 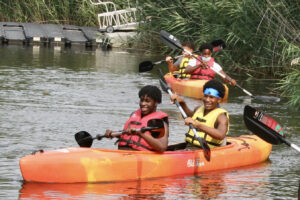 This summer, the program held a public paddle day for National Trails Day and eight paddle days for local youth groups. With funding from the National Park Foundation, the program partners also engaged Wounded Warriors and the Mission Continues to offer paddles for veterans and their families; three veteran paddles were held in FY21 with four more planned in FY22.

The Trail also worked with the NPS Chesapeake Bay office to offer free public paddles at Masonville Cove, an Urban Wildlife Refuge Partnership, in Baltimore City that also provides water access to the Trail. The Trail paddle program expanded out of the Baltimore region to another section of the Trail. In partnership with the Sultana Education Foundation, the Trail offered two kayak tours on the Sassafras River that launched from Turner’s Creek Landing on the Eastern Shore. A Trail ranger was on hand to tell the history of the river and the British raids in May 1813. Local youth group Bayside Hoyas and their families participated. 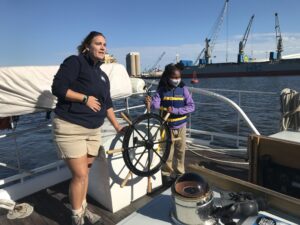 A student helps steer the skipjack SIGSBEE with the captain during a Trail Stewards maritime voyage. Photo courtesy NPS.

The Star-Spangled Banner NHT Trail Stewards Program connects students and communities that live along the 560-mile Star-Spangled Banner National Historic Trail with historical events that happened in their backyards. The Trail weaves together land and water routes in Maryland, the District of Columbia, and Virginia telling the story of the War of 1812 in the Chesapeake, culminating at Fort McHenry with the writing of the “Star-Spangled Banner,” the U.S national anthem.

This partnership program with Living Classrooms Foundation provides professional development for cohorts of educators as well as meaningful outdoor educational experiences for their students. In turn, the teachers and students design, participate in, and share legacy learning projects with their broader school communities. After taking a hiatus due to COVID-19, Trail Stewards resumed in late summer 2021. For the year, 14 schools/organizations participated in the program with maritime voyages. The classroom legacy projects will be completed in December 2021. 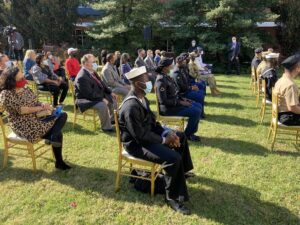 A group of new Americans during their naturalization ceremony at the Star-Spangled Banner Flag House. Photo courtesy NPS.

All 17 people who were naturalized are veterans or active-duty members of the military representing all services. They originate from the following eight countries: Cameroon, China, El Salvador, Germany, Liberia, Nigeria, Senegal and South Korea.

During the ceremony, National Park Service Deputy Director of Operations Shawn Benge, exercising the delegated Authority of the Director, signed a memorandum of understanding with U.S. Citizenship and Immigration Services Director Ur M. Jaddou. This agreement advances the meaning and stature of citizenship by building connections between new citizens and America’s parks.