This column shines a light on rising leaders in public lands and outdoor recreation who participate in PNTS’ Trail Intern Grants or Trail Apprentices Program.

Trail Intern Grants are distributed to help Trails nonprofits hire interns to further their missions and expand their capacities. The Trail Apprentices Program (TAP) is a career exploration program that helps up-and-coming and aspiring outdoor professionals aged 18-28 network and discover pathways to have careers in or hold leadership positions within National Trails nonprofits. 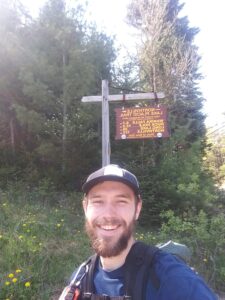 When Chase Gregory signed on to PNTS’ Trail Apprentice Program (TAP), he had one goal—to network with at least one other computer programmer who worked in outdoor recreation. Not only did he meet that goal, but his participation actually led to the expansion of his personal business.

Chase discovered his love for the outdoors at the age of 14 while spending his summers working at a Boy Scout Camp in upstate New York. In the offseason, he spent as much time as he could hiking around his hometown of Jamestown, New York, including on the 400-plus-mile portion of the North Country National Scenic Trail (NCNST) that overlaps with the Finger Lakes Trail (FLT). It was during one of these hikes that Chase saw a flier advertising an opportunity to volunteer for the FLT’s IT and Web Development Committee.

After volunteering for more than a year, Chase had proven himself as an up-and-coming leader at the FLT. The Trail’s Executive Director, Quinn Wright, then approached Chase about joining the NCNST’s new Next Generation Coalition. Chase jumped at the opportunity and became one of the original members of that program when he signed on. Impressed by his drive and computer programming ability, Quinn then offered Chase a contract to build a digital database for the FLT.

Eager to turn his volunteer experience into employment, Chase accepted the position. It was while working on this project that Chase learned of PNTS’ Trail Apprentice Program (TAP). He applied and was accepted to the program as a member of the 2021 TAP cohort.

As part of the TAP programming, Chase attended a presentation about a computer program that tracked the relative economic value of interest points on trails by looking at foot traffic. Chase arranged a one-on-one meeting with the creator of that program and this led him to discover a set of new tools that helped inform his work on the FLT. That meeting also connected him with an opportunity to procure his second database contract, this time with the National Democratic Redistricting Committee.

According to Chase, his custom FLT database is now one of the most robust tools in use anywhere in the National Trails System. Built using open-source software, the advanced database integrates with programs like Quickbooks and Eventbrite, and it even tracks land ownership across the state of New York, parcel by parcel. “I’ve always thought that the trails have been lacking in (technological) development,” Chase says. “And I’ve always felt that, if we were

to upgrade the infrastructure of trails technologically, we’d be able to save hundreds of thousands of dollars by automating some of the administrative work… The less clicks that our office users have to do, the better.”

Today, Gregory is working to put the final touches on the FLT database, though he says that the program is already saving hours of administrative time a week for FLT employees. He also still works with the NCNST Next Gen program and the FLT’s IT and Web Development Committee as a volunteer.

Of his experience with the TAP, Gregory says it “was really awesome.” He says that he would encourage any young professional with an interest in trail work to get involved with the program, if possible, adding that it’s a great way to “find your particular niche inside of the trail system that will really help the trail in a positive light.”