The creation of the AT changed the course of hiking history

In June of 1921, a 42-year-old man sat in the room of a friend’s house in New Jersey. He had spent many days in this place, where he had come to heal from the unexpected death of his wife. Contemplation in quiet places had helped Benton MacKaye recover from setbacks before. As a teenager, he spent the days and weeks following his father’s death exploring the woods surrounding the family cottage in Shirley Center, MA. Climbing the hills proved to be restorative. He thought about that a lot as he sat in Charles Harris Whitaker’s house. And it became the germ of an audacious idea. MacKaye envisioned a multi-state super hiking trail—one that originally would extend from Mount Mitchell, NC to Mount Washington, NH. 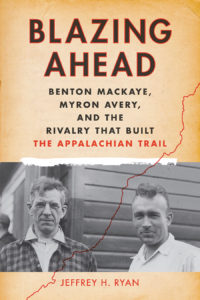 Three months later, MacKaye’s vision went public in the Journal of the American Institute of Architects with his article “An Appalachian Trail: A Project in Regional Planning.” The piece was a tour de force. MacKaye began his article by making the case that the Appalachian Trail (AT) would provide a sanctuary from everyday life, a place to “gain oxygen and perspective.” Yet, MacKaye also saw that the trail would provide economic benefits. He envisioned “farm camps” popping up near the AT to provide food and lodging for hikers. He also predicted that over 40,000 jobs would be created to build, support, and protect the trail.

Also impressive was the map Benton MacKaye drew to accompany his article. This remarkably accurate depiction of what would become the AT’s final route helped capture the imagination of readers and created a blueprint for future success. Taken as a whole, “An Appalachian Trail: A Project in Regional Planning” was and continues to be one of the most important pieces of writing in the history of outdoor recreation.

Yet, as inspiring as MacKaye’s plan was, it would likely have remained an unfilled vision if not for the relentless drive of Myron Avery. By 1928, the full-time maritime lawyer and Naval officer Avery was rolling up his sleeves and seeing to it that the Appalachian Trail project, which had lost steam, would never lose momentum again. Avery oversaw every detail of the trail’s construction (arguably at times to a fault) until the last mile was blazed in Maine in 1937. MacKaye and Avery differed enormously in personality and style, which led to an inevitable falling out in 1934. But one thing they did agree on was the volunteer club/public sector approach to building, maintaining, and protecting the trail.

In 1922, MacKaye was advised to cede the task of building the AT to a federation of local hiking clubs that would be responsible for siting and maintaining sections of trail within their jurisdictions. It was a brilliant idea that gave individual clubs the incentive to see the trail to completion and to advocate for its enduring viability. In places where the AT crossed public lands, clubs worked with State and Federal agencies to build and maintain it. Avery personally lobbied State foresters, game wardens, the Civilian Conservation Corps, the U.S. Forest Service, and the National Park Service to take part in the creation of the trail. This set the stage for the ongoing collaboration that has been critical to managing the AT as a resource to this day. Like the Appalachian Trail itself, this management model has endured and inspired other trail systems to follow a similar path.

In this 50th Anniversary of the National Trails System Act, we have ample reasons to celebrate the dreamers, doers, and partnerships that transform our trails from grand visions into places where we can step into nature to gain oxygen and perspective. Without them, our horizons would be diminished indeed.

Jeffrey H. Ryan is also the author of “Appalachian Odyssey: A 28-Year Hike on America’s Trail” (2016, Down East Books). He is an avid long-distance hiker and keynote speaker who often tours North America in his 1985 VW camper.