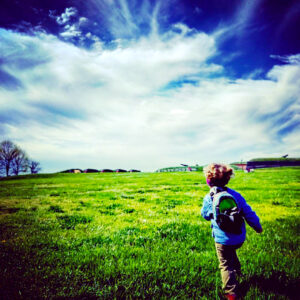 With all the 2020 school and public outreach programs for the Star-Spangled Banner National Historic Trail (SSBNHT) cancelled due to Covid-19, Trail staff looked to collaborate with other organizations to reach audiences virtually.

First was a Facebook Live event with the U.S. Coast Guard Mid-Atlantic in June. For the video, the Coast Guard featured its annual event of placing the seasonal red, white, and blue Francis Scott Key buoy in the Patapsco River at a place some historians believe Key was anchored when he was inspired to write the U.S. national anthem. The event featured the live action of the buoy being placed into the river, followed by the playing of the national anthem and a short interpretation program by Trail staff.  The video had 208,000 views.

In July, a second Facebook Live event was done in partnership with Cool Progeny, a Baltimore-based organization that promotes local family-friendly activities and events. The virtual event was part of their Summer Adventure Program lunchtime series and it featured two Trail partners for the video, both conducting short programs for youth viewers. The video received 1,600 views.

The Trail also partnered with staff from the National Mall in August to collaborate on a 10-day Facebook series that discussed the British invasion of Washington, D.C. The invasion route is part of a Trail segment and several partner sites were highlighted. In total, the series had a reach of 71,467.