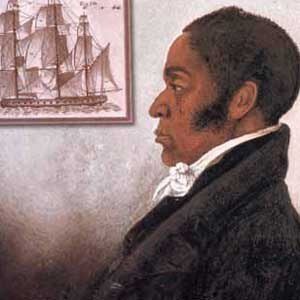 Adapted from a NPS news release

The Washington-Rochambeau Revolutionary Route National Historic Trail (WARO) has announced a partnership with Philadelphia’s Museum of the American Revolution to highlight the lesser known stories of African Americans, Indigenous populations, women, and children and their contributions to the American Revolution. The partnership includes the commissioning of a painting by renowned American artist Don Troiani in an exhibition of Troiani’s work at the museum in 2021.

The commission will depict James Forten (1766-1842), a free teenaged African-American Philadelphian who, in 1781, witnessed the march of American and French forces through the city on their way to Yorktown, VA. Forten’s patriotism was particularly animated by the presence of companies of Black soldiers in the Rhode Island Regiment of the Continental Army. The commissioned painting will show Forten and a diverse cast of Philadelphians watching the march of Washington’s Continental forces, specifically the ethnically diverse ranks of the Rhode Island Regiment, marching down Chestnut Street near Independence Hall. This commission depicts a critical moment in Forten’s early life, when the promise of the Revolution motivated him to take up arms, despite the personal risks, including possible capture and enslavement. It will illuminate an early chapter in the life of a man who would become one of Philadelphia’s most prominent citizens in the early 19th century, as well as a leading abolitionist. Forten was inspired by the belief that the founding ideals of freedom and equality applied to all Americans.

“This project aligns with the trail’s mission to uncover and share compelling stories about the diverse people and complex events associated with the American Revolution,” said WARO Trail Administrator Johnny Carawan. “Most importantly, it brings us closer to helping the public make personal connections to the Washington-Rochambeau Trail.”