TRAIL PANELISTS AT OR SHOW 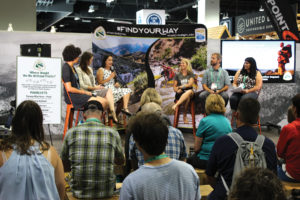 In July, the Partnership for the National Trails System attended the 2018 Outdoor Retailer Summer Market in Denver, CO. During our time, we met with nonprofit and Federal agency partners and key players in the outdoor industry, and took part in various events commemorating the 50th Anniversary of the National Trails System and Wild and Scenic Rivers System Acts. One of these events was an educational panel celebrating 50 years of collective impact along our National Trails System. We were joined by our nonprofit partners at the American Hiking Society, Continental Divide Trail Coalition, Ice Age Trail Alliance, Pacific Crest Trail Association, Appalachian Trail Conservancy, Florida Trail Association, and Rails-to-Trails Conservancy, and corporate partner REI. Another trail-related panel will be held for those planning to attend the Winter Market, being held November 8-11 in Denver, CO. Stop by Tattered Cover Bookstore, 2526 East Colfax Ave., at 7 p.m. November 7 for an all-star panel and book signing from some of the Rizzoli International Publications partners.

In May, the National Forest Foundation (NFF), the nonprofit partner of the U.S. Forest Service (USFS), launched a five-month long “Summer of Trails” crowdfunding campaign to raise awareness and funds for maintaining and improving the nearly 158,000 miles of trail across the National Forest System—the largest trail network in the country. By capitalizing on the 50th Anniversary of the National Trails System, NFF’s goal is to raise at least $500,000 from the crowdfunding campaign that will end on National Public Lands Day, September 22, 2018. The USFS will match up to $500,000 for a total of $1 million, which will be invested in trail maintenance and improvements across the National Forest System. NFF will divide all funds raised equally among the nine Forest Service regions (Alaska, Pacific Northwest, Pacific Southwest, Southwest, Rocky Mountain, Intermountain, Northern, Southern, and Eastern). Local conservation and trail groups will apply for funding for priority trails in each region, and NFF will coordinate with the USFS to issue grants to the most competitive proposals in winter, and work is expected to begin in spring 2019.

The National Park Foundation (NPF), the nonprofit partner of the National Park Service (NPS), is raising funds for priority projects and inspiring more people to #FindYourWay along trails and rivers across the country in celebration of the 50th anniversary of the National Trails System and the Wild and Scenic Rivers System. NPF partner Coca-Cola is the lead supporter for this effort. Projects and grantees will be announced later this year. #FindYourWay aligns with the #FindYourPark #EncuentraTuParque movement and invites the public to discover their own personal connections to thousands of trails across the U.S. and more than 12,000 miles of rivers protected in the National Wild and Scenic Rivers System. This effort is part of the NPF’s Centennial Campaign for America’s National Parks, which launched in 2016 to commemorate the 100th anniversary of the NPS. To date, this comprehensive fundraising campaign to strengthen and enhance the future of America’s treasured national parks has raised nearly $500 million in private donations from individuals, foundations, and companies.

UPDATE FROM 7/18/18  NPF invested more than $500,000 through 20 grants, which can be explored through this interactive map. National trails impacted by these grants include the Appalachian, North Country and Natchez Trace national scenic trails and the Ala Kahakai, Old Spanish, El Camino Real de Tierra Adentro, Pony Express, Oregon, California, and Santa Fe national historic trails.

To celebrate the 50th Anniversary of the National Trails and Wild & Scenic Rivers Systems Acts, the National Park Foundation (NPF) is supporting projects across the country to enhance the country’s national trails and wild and scenic rivers and provide increased public access. NPF invested more than $500,000 through 20 grants, including those impacting the following trails: 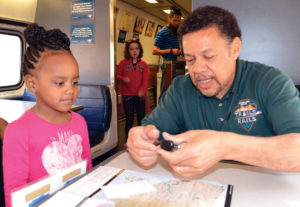 The National Park Service commemorated Earth Day and the 50th Anniversary of the National Trails System and the National Wild and Scenic Rivers System with a multi-park and multi-region effort on April 22, 2018. Trails & Rails volunteers from the national parks of New York Harbor and the National Mall and Memorial Parks helped Amtrak passengers become more aware of our national trails and wild and scenic rivers as they traveled along the Northeast Corridor. The Amtrak route between New York City and Washington, D.C. parallels or intersects with three national historic trails: Captain John Smith Chesapeake NHT, Star-Spangled Banner NHT, and the Washington-Rochambeau Revolutionary Route NHT. Other Amtrak routes and programs also parallel or intersect with the Appalachian, North Country, and Potomac Heritage national scenic trails and the Juan Bautista de Anza, Lewis and Clark, Old Spanish, Oregon, and Santa Fe national historic trails.

The National Environmental Education Foundation (NEEF) will celebrate the 25th annual National Public Lands Day (NPLD) on September 22, 2018. In addition to highlighting NPLD events that incorporate the 50th anniversary of rivers and trails (October 2, 2018), NEEF has also launched a grant opportunity to support community-based projects, such as repairing trails that were impacted by major storm events. NEEF, with major funding support from Toyota, is offering $100,000 in mini-grants to support restoration and/or resilience-focused volunteer events on public lands. 2018 Every Day Event awarded grantees will be expected to lead service events that either restore public lands and/or make those lands more resilient to future natural disasters. Grant-funded activities will mobilize community volunteers and educate participants about their role in protecting the longterm sustainability of their local public lands. Funds will be provided to friends groups, formal and informal educators, and local nonprofits who consistently partner with public lands. Exemplary applicants will show how grant funds will be used to get people out in nature as part of restoration and/or resilience efforts. In addition to involving individual community members, the applicant will target specific segments of the population, such as young adults and military veterans, through local community partnerships. Applicants can request up to $8,000 in grant funds.