When Dale Shewalter, a school teacher from Flagstaff, AZ, stood on top of Coronado Peak near the U.S./Mexico border in the late 1970s and imagined a single trail connecting deserts, mountains, canyons, forests, communities, and people, the dream of the Arizona Trail was born. The idea of a trail traversing the length of the Grand Canyon State caught on quickly, especially considering over half the trail already existed on the ground, and the proposed route was almost entirely on public land. 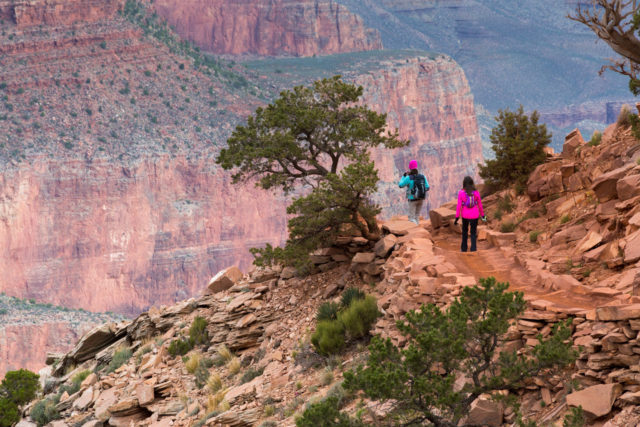 After nine years it became clear that no particular State or Federal agency had the capacity to keep up with the momentum of the ambitious project. So in 1994, the Arizona Trail Association (ATA) was formed to recruit and train volunteers needed to construct hundreds of miles of trail as well as coordinate with all agencies, municipalities, private property owners, and recreational user groups. This year marks the 10th anniversary of designation as a national scenic trail and the 25th anniversary of the ATA as a nonprofit organization.

In celebration of these two significant anniversaries, the ATA is working with Gateway Communities through the State to host 25 Arizona Trail (AZT) gatherings that will bring together hikers, trail runners, mountain bikers, horseback riders, volunteers, land managers, and other members of the trail community to share stories and raise a pint to the AZT.

The signature event for 2019 is AZT in a Day on Saturday, October 12. This initiative will encourage hundreds of individuals, families, and groups to work together to collectively cover every mile of trail within a single day. An interactive registration platform can be found online, and advance registration is required to effectively manage the total number of individuals and vehicles at specific trailheads Statewide.

The trail has improved exponentially since its designation as a national scenic trail. Some of the major accomplishments include the completion of the trail in 2011, securing permanent rights-of-way across State Trust Lands, the development of a youth stewardship program, and the fabrication and installation of over 80 steel gates to protect the trail from motorized impacts while meeting the needs of all trail users (including wheelchairs, handcycles, and full-loaded pack stock).

The ATA is currently coordinating 70 miles of trail construction projects where the AZT is colocated along dirt roads. This will minimize the possibility of motorized interface and provide a primitive path more consistent with a national scenic trail experience.