A decade in the making: Temporal Gulch Passage reroute approved to provide safer alternative for AZT 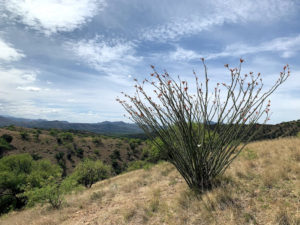 Photo Credit: Zach MacDonald
Trail construction on the Temporal Gulch Passage reroute project is anticipated to begin in 2020 to replace 15 miles of paved and dirt roads with 32 miles of sublime trail. The goal is to finish the project by 2025.

Over the past decade, the Arizona Trail Association (ATA) has been working to find a safer, more scenic alternative to the trail’s current alignment near the town of Patagonia, AZ, which includes three miles of paved roads and 12 miles of dirt roads. The segment between Harshaw Road Trailhead and Walker Basin Trailhead is among the most disliked of the entire Arizona National Scenic Trail (AZT). This is in stark contrast to the town of Patagonia itself, which is one of the most beloved trail towns and a majority of thru-hikers report they’re likely to visit again.

Due to lack of public land surrounding Patagonia, it has been difficult to secure easements allowing the AZT to cross private property, especially when there are numerous private landowners. So the trail remained on Harshaw Road (paved) and Temporal Canyon Road (dirt), which wasn’t ideal but wasn’t all that bad either. That changed when increased mining activity south of Patagonia transformed a quiet rural road into an industrial route. Up to 50 large trucks travel along Harshaw Road each day, carrying chemicals, explosives, and other hazardous materials to support mining operations. The importance of moving the AZT off Harshaw Road had never been more important for the safety of long-distance trail users (who have to walk or ride along Harshaw Road for three miles) and day trippers driving to and from the trailhead. 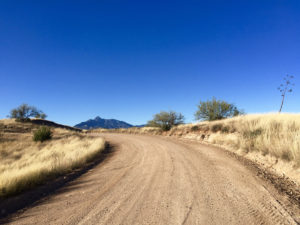 A potential route was discovered near Big Casa Blanca Canyon that would only cross two parcels of private land, owned by Wildlife Corridors and Hudbay Minerals. Once approval was secured, the ATA began working with the Coronado National Forest and other agencies to take the necessary steps to approve the trail project, including comprehensive biological and cultural surveys.

After years of hard work and determination, the ATA received approval to proceed with the Temporal Gulch Passage Reroute Project in late March 2020. Coronado National Forest Supervisor Kerwin Dewberry signed the Decision Memo authorizing trail construction, with concurrence from the U.S. Fish and Wildlife Service that the trail project is not likely to adversely impact threatened and endangered species. 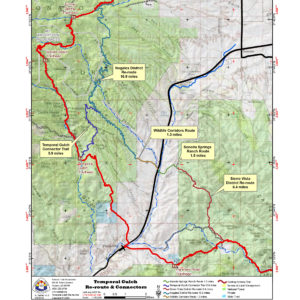 Learn more and opportunities to support this project: