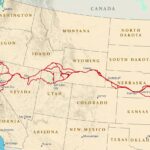 Map of the California NHT courtesy of NPS.

The California National Historic Trail follows in the footsteps (and wagon ruts) of more than 250,000 emigrants who made their way across the continental United States during the 1840s and 1850s in search of riches during the California Gold Rush that began in 1848, or looking for land they could settle in order to start anew.

Eastern Terminus: 4 locations along the Missouri River in Missouri and Iowa .

Western Terminus: Several location in Central and Northern California, as well as Eugene and Portland Oregon.