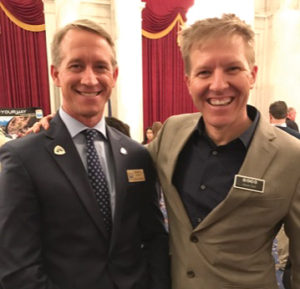 During the Hike the Hill reception in Washington, D.C. this February, the Executive Director of the Arizona Trail Association (ATA), Matthew Nelson, introduced himself to me as a William Clark descendant. As if that was not exciting enough, while I was introducing him to the Lewis and Clark Trail Heritage Foundation, Inc. attending board members, the Conservation Director of the International Mountain Bicycling Association (IMBA), Aaron Clark, fortuitously walked by. I was struck by the familial resemblance and last name, so I grabbed him and asked if he was also a Clark descendant. I then had the pleasure of introducing the two Clark relatives to each other. They had previously spoken via phone but had never met in person. You never know who you will meet at a PNTS gathering! We are truly one big trail family.