The Lewis and Clark Trail Heritage Foundation (LCTHF) celebrated the 50th anniversary of its official establishment on March 11, 2019. The very next day, as part of the John D. Dingell, Jr. Conservation, Management, and Recreation Act, the President signed into law an extension of the Lewis and Clark National Historic Trail (LCNHT) that relocates the eastern terminus from Wood River, IL down the Mississippi River and then up the Ohio River all the way to Pittsburgh, PA. The added 1,200 miles bring the total length of the LCNHT to 4,900, and also adds Indiana to the national trails map, the final State to be included.

LCTHF expects that the enhanced visibility of and closer proximity to the trail for residents in the eastern States will eventually lead to greater appreciation for the story nationwide. The extension will also increase tourism to the States included in the extended route, as well as to the originally designated western States, as travelers follow the trail from Pittsburgh to the Pacific.

The members of the LCTHF Eastern Legacy Committee, consisting principally of Phyllis Yeager and Jerry Wilson of Indiana, Mike Loesch of Ohio, and Paige Cruz of West Virginia, are to be especially commended for this achievement. They will continue to carry out the site marking efforts, both on and off the officially recognized trail, that they have been doing for years via funding by grants from LCTHF.

Following a wonderful and well-attended media event announcing the trail extension in Clarksville, IN, on May 13, 2019, the committee members (Clay Jenkinson, editor of the We Proceeded On quarterly journal, and LCTHF President Lou Ritten) met with Superintendent Mark Weekley and his team with the LCNHT.

LCTHF is committed to working with the National Park Service (NPS) and other partners to incorporate the additional miles seamlessly into the existing trail. Since it is primarily a water route, LCTHF intends to work with the Corps of Engineers along with NPS on matters pertaining to the river itself. LCTHF will assist the NPS in data collection, make introductions to partners it has worked with for years, and lend its on-the-ground expertise and local knowledge. LCTHF will inform tourist bureaus and chambers of commerce in the extension States of the new opportunities for travel and tourism now available to them. LCTHF will also give advice on where to place auto-route signage along roads on both sides of the Ohio that will direct visitors to sites of interest.

LCTHF believes the extension of the trail and increased recognition of the Lewis and Clark story bode well for the nation, all States along the now-extended trail, and LCTHF itself as it enters into the next half-century. LCTHF thanks the Partnership for the National Trails System and its sister trail organizations for helping to make this extension a reality. Let us proceed on together! 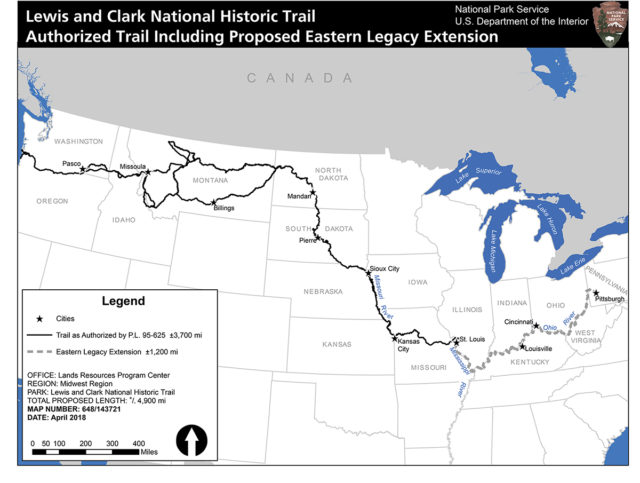 The Lewis and Clark Trust, Inc. (LCT) is very pleased with the addition of 1,200 miles to the Lewis and Clark National Historic Trail (LCNHT). The trail now totals 4,900 miles from Pittsburgh, PA to the mouth of the Columbia River.

The trail addition is filled with “high potential historic sites” and “high potential route segments” that strengthen the LCNHT’s service to all people. The newly added trail segment will help in telling a fuller story of the Lewis and Clark Expedition and will emphasize the importance of the preparation for the expedition to help make it a success.

The John D. Dingell, Jr. Conservation, Management, and Recreation Act was recognized as the legislative vehicle to bring this service to the American people and international visitors. Bud Clark said, “This is an opportunity for all the communities along the new trail segment to tell their story of Lewis and Clark while being linked together in a historical event.” Rep. Hollingsworth said, “The curiosity of the American people is what we celebrate today, to explore what is unknown. Today, we continue that spirit of curiosity, to explore what we can do as a people.”

This is clearly the reason we need more LCNHT auto tour route miles, miles that encourage tourism, preservation of cultural and natural resources, health and wellness in the outdoors, and educational opportunities in the classroom and field. The values of Lewis and Clark—perseverance, shared responsibility, and pride in accomplishment—will still bring success today just as it did from 1803-1809.

For more information, please contact the Lewis and Clark Trust, Inc. at (859) 278-7723 or email pmjlmallory@windstream.net.