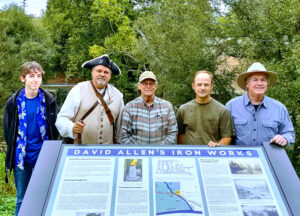 The discovery of a long-lost iron forge on the Overmountain Victory National Historic Trail by a grandfather and his grandsons Jonah (age 9) and Phillip Walker (age 6), Eli Swaim (age 11) and Gabe Mitchell (age 16) is indicative of the rebellious spirit of the American Colonists, without which Patriot forces may not have had a chance to secure their independence from Britain.

Doug Mitchell of Elkin, North Carolina knew there was history to be uncovered near the current site of the Elkin Library next to Big Elkin Creek, though he never imagined he would discover something as important as a lost iron forge.

Doug says combing the creek for things like pottery sherds and musket balls is a hobby. And, though his discoveries usually don’t carry any financial value, he told Yadkin Valley Magazine that “it’s the fun of finding something from bygone days” that motivates him on his quests. Plus, he added, it’s “a great way to spend time with my grandsons.”

After a storm swept through the area last fall, Doug and his grandson, Gabe decided to head down to Elkin Creek to see if they could find anything that may have been turned up by the flood waters. That day, Doug says, “We found two pieces of something that looked like rocks but I knew there was something different about them.” He posted images on Facebook and found consensus that they must be slag—a word for the rock-like bits of material that one gets when removing iron ore from stone through the use of a high-temperature furnace. 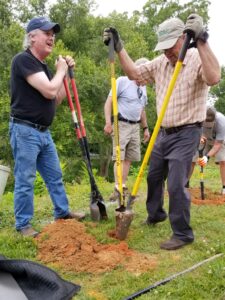 Experts knew that the site of North Carolinian David Allen’s lost forge was near where the Mitchells made their slag discovery and, with help from local historians Bill Blackley and Jason Duncan, Mitchell was able to zero in on the site near the library with certainty. “I had heard rumors that there had been an old 18th-century forge here…but didn’t know much more,” says Doug. He and Duncan began pouring over historical records, deeds, and maps of the area to see if his suspicions were correct. As it turned out, they were. Not only had he found the site of Allen’s missing iron forge, but, according to records from Elihu Ayers, a Private in the American Army during the Revolutionary War, the forge  likely played a key role in the Patriot victory over the British at King’s Mountain in 1780—a victory that marked a turning point in the war.

Similar to the Stamp Act of 1765 and the Townshend Act of 1767, the Iron Act of 1750 banned the production of metal goods in the New World and left the colonies dependent on expensive imports.

Despite this ban, a handful of iron forges remained in operation in the colonies several years before the start of the American Revolution and, without them, it’s likely that the United States would not have been able to hold off the British troops sent to quell the American rebellion.

Not only was this iron forge supplying raw materials to American forces, but it is believed that they were also illegally crafting metal goods for farmers and soldiers in the area—goods that would have been necessary for supporting the roughly 1,000 militia members that faced the British at the Battle of King’s Mountain.

Enthusiasts rallied to fund the installment of signage about the long-lost forge on the site.

Says William Blackley, who helped identify the site with Mitchell and Duncan, “David Allen’s Settlement was a hotbed of patriotism…Through all the history research and documentation… We learned that (our community) can be proud of our major contribution to the success of the Revolutionary War.”

More information and historical records can be found at: webjmd.com/elkin/index.html