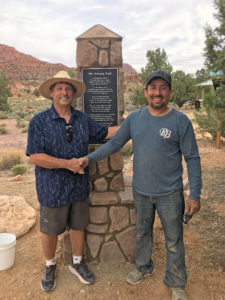 The Arizona National Scenic Trail’s (AZT) most photographed features include the Grand Canyon, Picketpost Mountain, saguaro cacti, sunsets, and Border Monument 102 at the trail’s southern terminus. For thru-hikers, the historic monument on the U.S./Mexico border marks the beginning of a long journey ahead or the accomplishment of a lifetime. Conversely, the Stateline Trailhead at the Arizona/Utah border has been lacking an official monument announcing the “end of the Arizona Trail.” There’s a campground and a trailhead register, but all of America’s completed long-distance trails have southern and northern terminus markers. As of May 6, 2018, so does the AZT!

The Arizona Trail Association (ATA) started consulting with the Arizona Strip Office of the Bureau of Land Management (BLM) last year for permission to construct a northern terminus monument. The idea was to match the dimensions of Border Monument 102, and the BLM suggested natural stone construction to match the surrounding landscape.

That’s when the ATA contacted Carlos Rodriguez of RB Stonework, a fifth generation stonemason from Payson, AZ, who has created stone benches at the Pine and Freeman Road Trailheads. Working with photographs of the southern terminus marker and landscape images from the Buckskin Mountain Passage, Rodriguez collected and cut sandstone to create an aesthetic and significant marker. He and his crew met with Passage 43 Trail Steward Paul Ostapuk at the Stateline Campground to construct an official monument.

The project took two days, and included installation of the two plaques on the stone obelisk. One plaque recognizes the northern terminus and the fact that the AZT was designated a National Scenic Trail by Congress on March 30, 2009. The other plaque features the iconic poem “The Arizona Trail,” by Dale Shewalter, the founding father of the Arizona Trail. They completed the project just in time to see a northbound thru-hiker finish his 800-mile journey.

No doubt this will soon be among the most photographed features along the entire AZT. And for anyone who has completed the trail before now, it’s worth a return trip. While you’re there, consider exploring some of the natural wonders nearby: Coyote Buttes, The Wave, Buckskin Gulch, Paria Canyon, and Vermillion Cliffs. The end of the Arizona Trail marks the beginning of other grand adventures. This project was made possible through support from the BLM and ATA members, donors and volunteers. 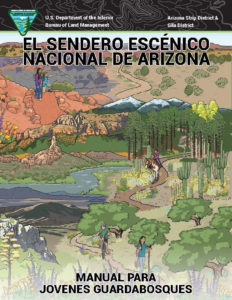 Since 2015, the Arizona Trail Junior Explorer Handbook has helped introduce thousands of young people to the Arizona National Scenic Trail (AZT) through its 20 educational pages complete with illustrations. Now it has been translated into Spanish, and 5,000 copies have been printed. The Manual para Jovenes Guardabosques aims to engage young and diverse audiences in the exploration, appreciation, and stewardship of the AZT.Portions of trailhead signs have been translated over the past few years, but this is the first fully-translated resource. The project was made possible by the translation skills of Melissa and Marisol Urreiztieta, a $1,000 grant awarded by the Back Country Horsemen of America Education Foundation to the Arizona Trail Association, and the Bureau of Land Management.