The following highlights for the Juan Bautista de Anza NHT were provided by the National Park Service and the Anza Trail Foundation for the 2021 calendar year: 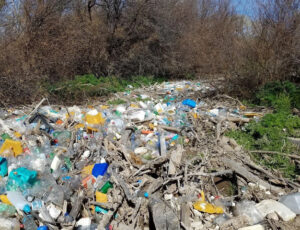 Almost 17 inches of rain fell during July and August along the Anza NHT in the Upper Santa Cruz Basin, replenishing soil moisture levels and causing major flooding just north of the Mexican border. The flood water carried debris from the streets of local communities as well as material from the river channel. The debris, including tree branches and tree litter, old tires, plastic bottles, styrofoam containers and other trash, concentrated as it moved eventually forming plugs or bottle dams in the river channel.

The floodwater then spread across the landscape, flooded the trail, and created a marsh making trail use and maintenance impossible. Thanks to ATCA’s remarkable volunteers, all sections of the Anza NHT are now open. In addition to mowing six to eight foot tall Amaranth (pigweed), ATCA Trail Crews rebuilt all 6 of the pedestrian bridges in the area, cleared fallen trees and rerouted the trail around places where the river cut a new channel. 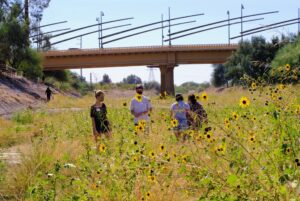 The project endeavored to inform our shared understanding of heritage in the Santa Cruz River Valley National Heritage Area through the exploration of natural and cultural landscapes, reflection, and participatory storytelling from the perspective of young stewards living in the Sonoran Desert. Using the ITE interpretive storytelling methodology, DYHP youth interns employed multiple mediums of storytelling to depict their personal connection to heritage — the intersection of environment, ancestry, community, and culture.

Anza Trail Foundation (ATF) Board Members participated in the National Park Service’s Foundation Document Workshop for the Anza NHT by submitting written comments and suggestion and attending all or part of the week-long virtual workshop sessions.

The workshop provided an exceptional opportunity to work with the Anza Trail staff and NPS Regional representatives on planning, identifying the priorities, values, future directions, interpretive themes, fulfillment of special mandates, and allocation of resources for the trail.

The Foundation Document will impact the ways we present our stories, integrate indigenous voices and plan recreational trail segments. ATF’s partnership with the NPS was strengthened by the opportunity to participate in planning the Anza NHT’s Foundation Document and it will facilitate a shared vision of future directions and priorities and more closely aligned efforts. 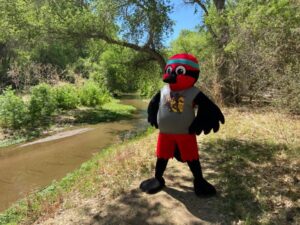 The Anza Virtual Fun Run kicked off its inaugural year in April 2021. The event corresponded with National Park Week and Park Rx Day. Participants were encouraged to get active, connect with their local parks, and learn about the historic and modern-day sites found along the Juan Bautista de Anza National Historic Trail.

During the two-week virtual event, 145 participants from around the globe shared the miles they ran, walked, hiked, or biked. Participants logged their mileage online via the Facebook event and miles were added to the group total to virtually move the team along the length of the trail over 1,200 miles from Nogales, AZ to San Francisco, CA. More than 1,300 total miles were logged over the course of the event, which was a collaborative effort planned and facilitated by staff from the Anza Trail, Western National Parks Association, Tumácacori National Historic Park, Anza Trial Coalition of Arizona, and Tubac Presidio State Park. 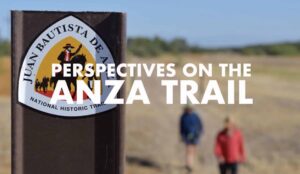 A partnership between the Anza Trail and the Friends of the LA River produced a video centering Indigenous voices in the Anza expedition narrative. Interviews with tribal representatives, Anza Trail scholars, and volunteers from the Los Angeles region were highlighted in this short video that reframes the history that is most commonly associated with the Anza Trail and its history. The video can be seen on the Friends of the Los Angeles River page: https://www.facebook.com/LosAngelesRiver/videos/274114464550397

The Anza Trail also produced a documentary in partnership with the Border Community Alliance of southern Arizona called The Pilgrimage to Magdalena. This half-hour film tells the story of an annual pilgrimage that takes place every October in southern Arizona and northern Mexico to honor the late 17th-century missionary, Father Eusebio Francisco Kino, and his patron Saint, Francis Xavier. The film was featured in the Religion Today Film Festival in Trento, Italy, where it won top prize in the “Migrations and Coexistence” category.