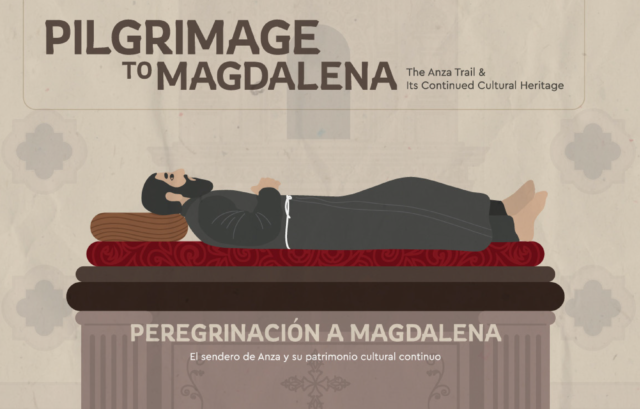 Every year beginning in late September and culminating on October 4, thousands of pilgrims from all over Mexico and southern Arizona converge on the city of Magdalena de Kino, Mexico, bringing a 120-mile stretch of the Juan Bautista de Anza Trail National Historic Trail (JBDANHT) to life. It’s a journey known as the “Pilgrimage to Magdalena”, and a new short documentary film produced by the National Park Service and the JBDANHT in partnership with the Border Community Alliance (BCA) of southern Arizona is bringing the story of this little-known yet epic event to audiences around the world.

The pilgrims make the journey on foot or on horseback, beginning at various cities in the region, including one cohort that starts their journey 115 miles north of the final destination at the San Xavier del Bac Mission south of Tucson—the northernmost of the 24 Spanish-style missions established by Father Eusebio Francisco Kino in the Sonoran Desert Region of modern-day Arizona and Mexico during the 17th and 18th centuries—ultimately ending at the Chapel of Saint Francis in Magadelena, which also happens to be Father Kino’s burial site.

The tradition of walking through the Sonoran Desert for spiritual and cultural reasons can be traced back to Indigenous peoples of the region in pre-Hispanic times. The Pilgrimage itself, however, began in 1711 when Father Kino passed away in Magdalena, spurring the first pilgrims to make the trek from San Xavier del Bac to honor him and pay homage to his patron saint, Francis Xavier.

The pilgrims walk to fulfill their mandas, or promises made to Saint Francis in exchange for favor or protection. The end of the journey includes a moment of prayer and reflection at the Chapel over a reclining statue of the Saint. Legend has it that this statue was brought to the church by Father Kino himself.

Patrick Yoon, Community Volunteer Ambassador for the JBDANHT, points out that the roots of the Trail go back thousands of years, much further back than the trip made by Juan Bautista de Anza that gave the Trail its name. “​​It’s been used by indigenous peoples. It’s been used as a hunting network… It’s been used as a trade network. It’s had numerous uses and, at one point in a 6-month period, it was used by Juan Bautista de Anza and the 240 men, women and children (in his party). But that was only a six-month period in this thousand year time frame.”

The Pilgrimage to Magdalena, Yoon says, is just one more example of the “complexity” of the trail, which continues to unite people across cultural and international borders. “This legacy continues today,” Yoon says. “People use this trail every single day for major travel and recreation. And, because of this trail, you can see multiple different cultures tied together.” He says it was this fact that made it important for the folks at the JBDANHT to highlight the multicultural Pilgrimage on the Trail south of the US border with Mexico. “Even though it begins in another country, it’s still a part of the heritage of the United States,” Yoon says.

Currently the Pilgrimage to Magdalena film is being showcased at film festivals around the world, including the Religion Today Film Festival in Trento, Italy, where it won top prize in the “Migrations and Coexistence” category and was granted a two-week streaming engagement on Vativision, a streaming service developed and operated by the Vatican. BCA is currently looking for additional distribution and screening opportunities and hopes to share the film via Zoom this fall.

Anyone interested in hosting a screening of the film should contact BCA Board Member Sara Martin at smartin@bordercommunityalliance.org.