By Sandra Wiechert, National Secretary of Oregon-California Trails Association
Adapted from an article that appeared in the October 2017 Trails Head Traces newsletter 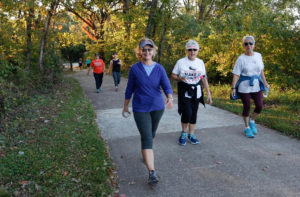 The Oregon-California Trails Association (OCTA) Trails Head chapter recently held an Oregon Trail event in Lawrence, Kansas, kind of accidentally but with good results. The new “Lawrence Loop” concrete walkway will encircle the city soon, with 17 miles done and the last five committed for completion. Last summer Sandra Wiechert, OCTA’s National Secretary, suggested to the Parks and Recreation department that there should be a series of back-to-back 5Ks along the new trail over several weeks so participants can walk the entire thing. The 5Ks were planned for each week in October 2017, featuring water stations and a history station to present the cultural history of that area of the Lawrence Loop Trail.

Allen Wiechert was asked to talk about the Oregon National Historic Trail where the Lawrence Loop Trail crosses it near Sixth Street and George Williams Way. On October 5, 2017, he set up a poster and handed out Douglas County maps to more than one hundred walkers showing where the Oregon Trail went through the area. He also shared some information and history of the trail to walkers as they briefly rested. He felt that all were quite interested and receptive to his comments and were eager to keep the maps. Most had known little, if anything, about the Oregon Trail, so the Wiecherts are trying to change that. He did the same thing again October 17, when the 5K for about 75 walkers went through the Baker Wetlands. For more information, visit www.lawrenceks.org/loop/walk.