The Lewis and Clark Trail Heritage Foundation is pleased to celebrate the U.S. House of Representatives’ passage, on the 40th anniversary of the designation of the Lewis and Clark National Historic Trail (LCNHT), of the Eastern Legacy Extension Act (H.R. 3045), which would extend the LCNHT eastward from Wood River, IL to Pittsburgh, PA. A companion bill (S. 3375) was also introduced in the Senate in late August. As of this publication deadline, the legislation had been referred to the Committee on Energy and Natural Resources.

The National Park Service (NPS) conducted a multi-year, thorough study titled “Extension Study Lewis and Clark National Historic Trail July 2016.” The final version was introduced in Congress by the Department of Interior on February 27, 2018. The study concluded that three of the 25 initially proposed segments evaluated are nationally significant and meet the criteria for inclusion in the LCNHT: 5A (Pittsburgh, PA to Louisville, KY), 5B (Louisville, KY to Cairo, IL), and 6 (Cairo, IL to Wood River, IL).

H.R. 3045 and S. 3375 would extend the LCNHT a total of 1,200 miles of water trail from the current start of our Congressionally designated trail in Wood River, IL, down a small section of the Mississippi River, then up the Ohio River through Illinois, Indiana, Kentucky, West Virginia, to Pittsburgh, PA. These three segments are an important part of the expedition as they convey vital facts, events, and locations where Lewis and Clark organized, recruited, and trained for their journey. Lewis began journaling in Pittsburgh, signifying the beginning of the expedition. The Corps of Discovery got in the boats and began working together as a team. These elements were critical to the success of the expedition, are a vital part of the Eastern Legacy of the Lewis and Clark Expedition, and comprise the heart of this recommendation for trail extension. 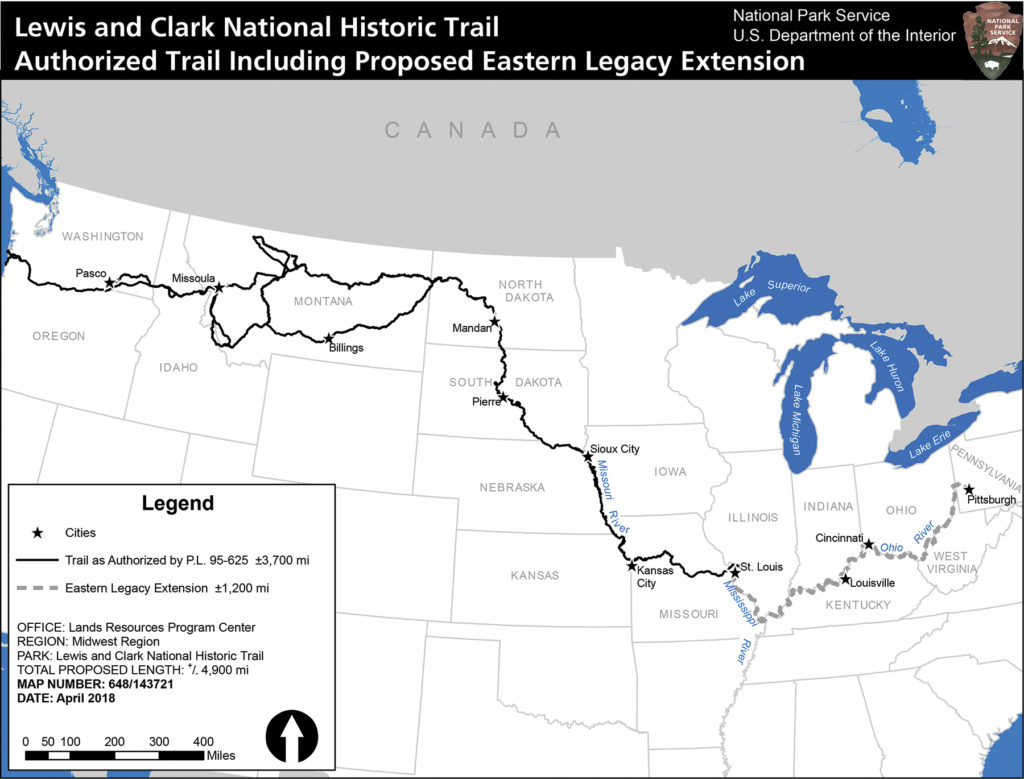 The NPS study concluded the potential trail extension would likely positively impact tourism on the existing LCNHT as well as in the proposed segments. We concur. For example, Indiana reports heritage tourism as a $12.2 billion industry.

Currently, Indiana is the only State in the union without a national scenic or historic trail. This new designation would “put Indiana on the map” along the route where the explorers planned, recruited, and recorded the beginning of their epic journey. Segments not included are still promoted and included in LCTHF promotional materials, websites, brochures, and through our various meetings.

We thank Rep. Luke Messer (R-IN) for introducing the legislation and cosponsors Susan Brooks (R-IN), Bill Johnson (R-OH), and John Yarmouth (D-KY). We thank Sens. Todd Young (R-IN) and Joe Donnelly (D-IN) for carrying our torch in the Senate. We also appreciate coaching from Gary Werner, Partnership for the National Trails System Executive Director, regarding our testimony in the House Natural Resources Committee’s Subcommittee on Federal Lands and our Eastern Legacy Committee for their tireless work on this effort.

Even though there is still much work to be done, we pause to reflect on our accomplishments to date.