In October, the Land and Water Conservation Fund (LWCF) Coalition launched the #SaveLWCF initiative to highlight the successes on the 52nd year of LWCF in 52 places in States and territories over the next year. The Coalition will be spotlighting conservation and recreation success stories, drawing attention to LWCF’s looming expiration, and increasing public support for Congress to act before America’s most important conservation and recreation program expires on September 30, 2018. 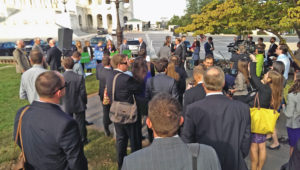 LWCF is America’s most important tool for meeting communities’ conservation and recreation needs, from iconic national parks, trails, and wildlife refuges, to sacred battlefields and historic sites, to working forests and critical habitat, to neighborhood playgrounds and recreation facilities. LWCF does not use any taxpayer dollars—it is funded with revenues paid to the government from offshore oil and gas drilling. This is a critical investment not only in our quality of life, but in American jobs. Outdoor recreation, conservation and historic preservation activities contribute more than a trillion dollars annually to the U.S. economy, supporting 9.4 million jobs.

LWCF has always been a bipartisan vision, and as a result, it has funded the most extensive network of open spaces in the world to camp, hunt, fish, hike, swim, and play. Our nation’s unique history and culture are available for our children and grandchildren to experience and enjoy. But there is much history still to preserve and our public lands and trails remain unfinished, vulnerable to loss and development that block access and ruin the visitor experience.

Lack of access is the number one reason hunters stop hunting. Trails remain unconnected. Forests as well as historic battlefields are being lost to suburban sprawl at an alarming rate. LWCF investments made every year in every part of the country are the answer to these issues, but they require certainty and consistency. Securing permanent funding and reauthorization for LWCF is one sure way we can work together to get good things done for everyone across the country.

To learn more about the initiative, visit www.lwcfcoalition.com/lwcf52weeks.